PULP TV: Cloak And Dagger Score Their Own Show As Marvel Marches On TV Land 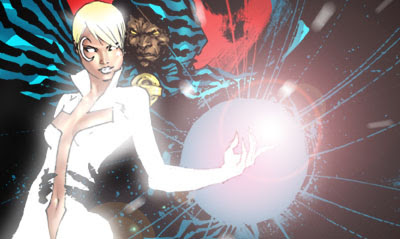 The right light has been switched on at the House of Ideas.

Just a few days after saying why She-Hulk would be ripe for TV land, The Hollywood Reporter riffs that Mavel Television isn't just set to bring The Hulk to ABC, but that the equal priority property to be developed for ABC Family is none other than Cloak and Dagger!

Cloak and Dagger's 'tour of duty' has been a rough one. Created in the 80's, Tyrone and Tandy have had a number of sadly short lived series' and guest appearances, despite being a motivational tale of two teenage runaways who find in each other the ability to overcome being used as labrats for a new kind of street heroin, the strength to stand up for the down-trodden as Cloak and Dagger, and the ability to star in kick-butt Jim Lee images like the above.

With a focus on quality over quantity though, Marvel wants to get both Hulk and C&D right before looking at other properties executives have nominated, such as Heroes for Hire, The Eternals, Ka-Zar and a cable series for The Punisher.
Posted by IADW at 10:12 am

Labels: Cloak and Dagger, Heroes For Hire, Hulk, Ka-Zar, The Eternals, The Punisher