If there's a few dinero rolling round loose in your wallet this time of the month, and you're thinking of adding an extra purchase to your pull-list, here's three quick-fire reviews to help steer your spare change.. 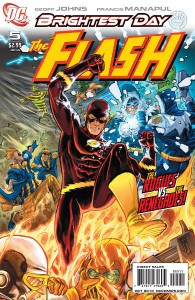 Proving he's not one to run hot or cold, Francis Manapul's art matches this silver-age story pulse for pulse. Teaming up with colourist Brian Buccellato's bold vibrant Crayola's, the duo make The Flash easily one of the most distinctive and attractive books on the stands.

That Geoff Johns guy ain't no slouch either - for his part he delivers flawless character moments in between the massive thowdown of the Rouges vs The Renegades, that prove there is no safer place for this book then in his hands. Flash Fact. ***** 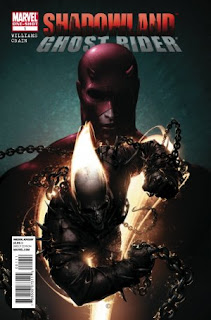 G.R needs to burn a new trail and this book is his off-ramp. Tired of being a gopher boy, Johnny Blaze shows up drunk to a whole castle of ninjas he can't hurt, but has been summoned to destroy, hoping death will give him release. Wrong.

Hopefully whoever takes Blaze for a spin next makes the most of the deal he negotiates with Heaven in this issue, and takes artist Clayton Crain with them. The dude makes Ghost Rider 'realistic' even when he's parked up on the back of a whale. ***** 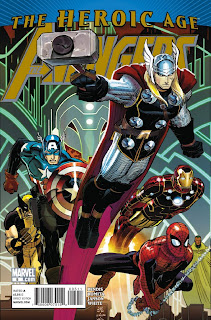 Sure there are still a few out of character speeches in this issue, but at least it's starting to feel like the Avengers again. Romita Jnr is finding his feet and, well it's amazing what Thor vs. Galactus will do.

Time is in a blender with the team scattered throughout it (oddly enough split into those the writer nails and those he doesn't), while in the future a shaky resistance meets in the shadow of the Ultron War, to dicuss an on-panel map that actually spells out the future of the current marvel universe.