FACE-OFF: The 6 Best Nightwing Artists Ever (Up Until Now)

Dick Grayson is easily my favourite aspect of the 'Bat-universe' - he's the super-hero I grew up alongside and when he's written right, the not-so-dark daredevil of Gotham is also the one I'd pick to split a few beers with, you know, if that DCU portal ever cracked open.

Now to fill the wait between Dick's current turn as a Batman and his imminent return to his own role as Nightwing (fingers crossed), I thought I'd mark the history of the sidekick who realised if he stepped to the side he'd cast his own shadow, with this; The Best 6 Nightwing Artists Ever (up until now). 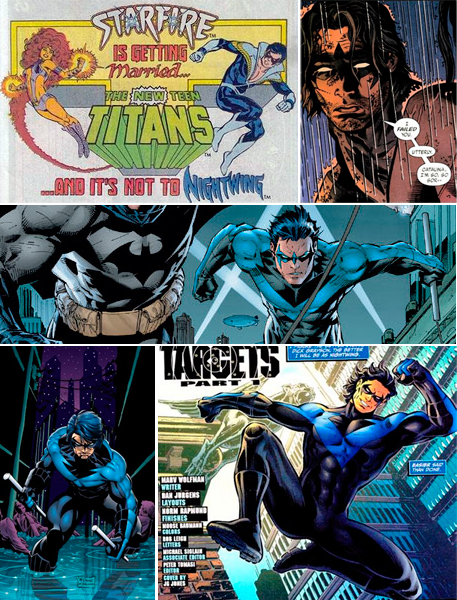 (Top to bottom)
6) George Perez When I was reading New Teen Titans I thought Dick had found the artist that should follow him for life. That's how good George's Grayson was and still is.
5) Patrick Zircher This one surprised me. I don't normally find Nightwing works with art that looks a little more 'Vertigo' in style, but Patrick's run was stunning stuff.
4) Jim Lee What can you say? It's Jim Lee. He draws a character for even five minutes and the result is iconic. It's the way he works.
3) Scott McDaniel Scott nailed the right balance of dark and light for the character, pulling off amazing camera angles and Grayson's acrobatic prowess in his own trademark way.
2) Dan Jurgens Sometimes you turn a comic page, see the artist handle a character and go 'Yes! That's how 'x' should look!' This is one of those moments.
As for the number one artist, well you're just going to have to click through for that...

1) Nicola Scott The Secret Six is one of those books that sadly will be better thought of in hindsight than it is in the present. An awesome read month in month out, it also has carried the trademark pencils of some of DC's best. Nicola Scott stands at the forefront of that list.
Seeing her take on Nightwing makes you realise when Dick Grayson does step back into his own suit and title, Nicola should be the first one offered a crack and making him fly.
Who is your number one Nightwing artist? Is it someone I have missed?
Posted by IADW at 9:38 am