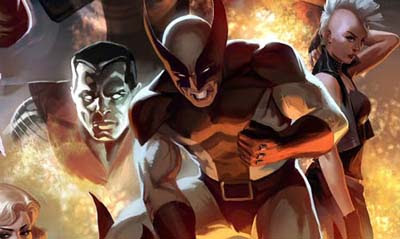 When Marko unleashes one of his giant Marvel cover montages like this, I want to send a proactive email to my LCS stating if the House of Ideas ever has Djurdjevic do interiors - I want in.

While it's good seeing Omega Red back in the picture, the highlight for me is the far right, with Logan in his brown and gold set of duds - I still don't think that getup has ever been beaten, and looks flat-out mean.
Plus if that ain't one of the best versions of Havok ever to see print, I'll eat my hat - Havok coat-hanger themed headpiece included.
Posted by IADW at 8:41 am