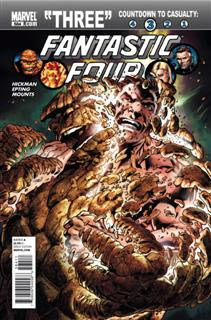 Slave - free spirit - slave - free spirit. The life and career of the Silver Surfer has ping-ponged backwards and forwards more times than his on-again, off-again master Galactus has had hot dinners. Still the latest incarnation of the 'Sentinel of the Spaceways' has shone a new light on the pair and it's one that means business.

In the pages of Jonathon Hickman's Fantastic Four run Reed Richards has been obsessed with the problem of 'How do you solve everything?' The challenge has taken the quartet from Atlantis to space, to the lost city of the High Evolutionary, where nearby underground Reed himself buried the future body of Galactus.
Now normally a straight thinking Reed would've jumped on the super-hero phone, tweeted or poked the Silver Surfer on Facebook to let him know about such action, but with his mind preoccupied, the Surfer has made the discovery on his own. Tracing the Fantastic Four's radioactive signature from the scene to the Baxter Building, Norrin Radd comes for an explanation... 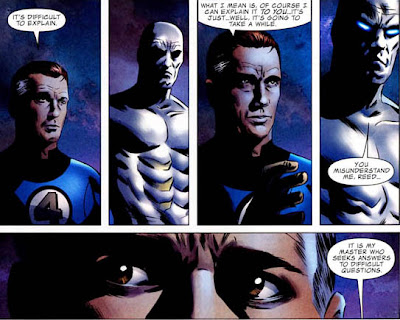 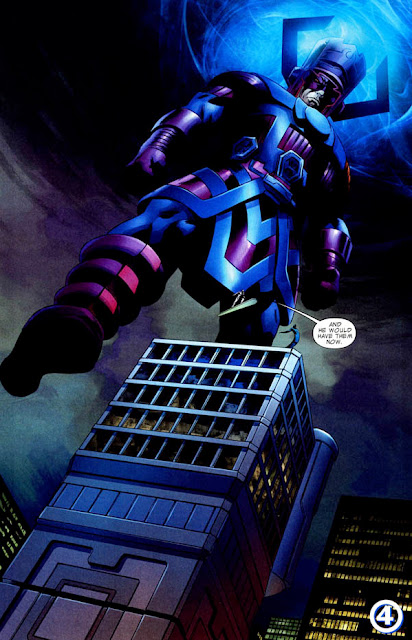 "And he would have them now". Damn. I bet that line's enough to make even a veteran like Mr. Fantastic soil his Calvins.
Part of the current Three storyline in Fantastic Four, artist Steve Epting nails both the Surfer and Galactus like they have rarely been seen in some time. It's only fitting too. With one of the four set to die before the end of Three, it makes sense that both the teams biggest rivals gather for the occasion.
Check this moment out for yourself in Fantastic Four #584, or pick up this week's FF #583 to see how both Reed and Galactus respond (Exclusive CBR preview here).
Posted by IADW at 9:00 am