Speedball Meets The Simpsons - It Happened 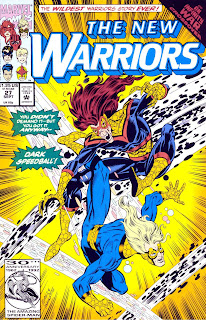 Sometimes you can read a comic and not notice a few details until the 369th read (or 370th if you like round numbers).

Case in point - New Warriors Vol1 #27 - one of those rare Infinity War crossover issues with an actual plot to it. 'Dark Speedball' is laying waste to Robbie's hometown of Springdale, Connecticut. As Rob bounces to stop his evil twin, his policeman father unknowingly moves against his own son, blaming the masked marvel for everything wrong in his community.

In the early 90's, another kid being blamed for the downfall of grammar, manners and childhood innocence was Bart Simpson of Springfield. I bet his family would've liked to poke the finger for a change.... 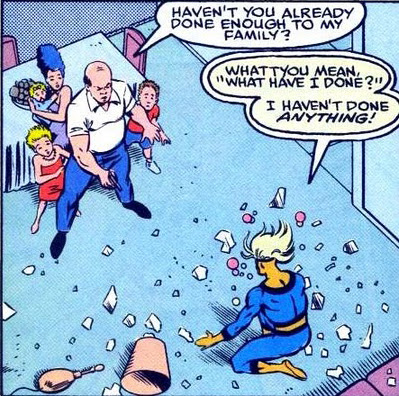 If only "I haven't done anything!" had've been "Don't have a cow man" that would've been priceless - less subtle, but priceless.
Who knows if writer Fabian Nicieza or artist Darick Robertson thought of bringing the two Spring-towns together for a visual gag, but whoever it was, I wish they had also talked the editor into letting 'Dark Speedball' keep his name off the cover too.
Finding the guest menace being named 'Blackball' in the actual story, stole a truckload of shine. I mean it's DARK SPEEDBALL! It sells itself.
Posted by IADW at 9:16 pm