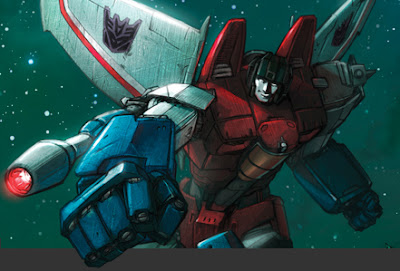 I'm sure this December folks already have the new Wolverine: The Best There Is #1 on their Santa lists, but if you are looking for a different kind o' festive cheer, these wee books are more than good for goodness sake; 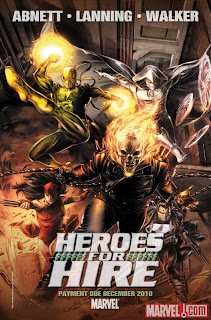 HIT PICK TO CLICK: HEROES FOR HIRE #1 (Marvel)
Some heroes sign up for the Hire, others don't know they're being used until the job is done. How's that going to float with the likes of Punisher, Moon Knight, Elektra, and Ghost Rider? Let alone heroes like Iron Fist and Falcon? Chuck this title in your shopping basket and find out!

Transformers: Best of Starscream (TPB - IDW) Starscream; he's a kids introduction to plotting and scheming, and watching his battle to claim the Decepticon throne is part of what makes the whole Transformer shebang cool. Grab this package of the dude's best efforts and remind yourself why Transformers G1 is still the best crowd around.
Black Panther: The Man Without Fear #513 (Marvel)
Ol' Black Panther has had a few seies in his time, but something tells me this one is going to be golden. Sure he's hijacking Daredevil's book to do it, but with the pulp art stylings of Francesco Francavilla and a tale by novelist David Liss pitting the new king of the urban jungle against Vlad the Impaler T’Challa has rarely had it so good.
Green Lantern: Larfleeze Christmas Special (One Shot - DC)
'Christmas on Sesame Street was brought to you by "I want! I want! I want!!" - well at least it is for Larfleeze, DC's hogger of greed for all things. But when he decides to grab Santa for himself, that's when the other DC heroes step in - after all they want their new toys too.

What December reads are you looking forward too?
Posted by IADW at 8:47 pm