WHO ARE THE 99? Get The Background On The JLA's Latest Battling Buddies 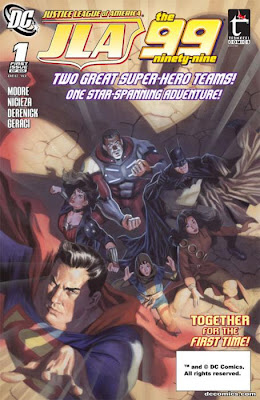 This week marked the release of JLA /The 99 #1, a team-up between the biggest icons in the 'western world' and some of the most popular Muslim based pop-culture superstars on the planet.

Co-written by former New Warriors and X-Men scribe Fabian Nicieza, it's promising to be a classic cosmos spanning tale that suits an event as big this, when worlds literally collide.

While DC and Teskeel both get the big thumbs up for putting together this fresh little number, the question remains for me at least 'Who are The 99?'

Before I pick up my copy of issue one I wanted a little more background, and that's when I stumbled across this - the intro to The 99's very own animated series. If you want to hit the ground running when you pick this crossover up, or just a little inside info, you should deffinitly flick a click on the old play button below.