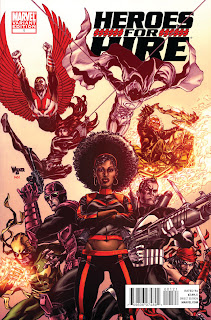 Get comic fans of under-appreciated characters together and they can yak for hours. Put those characters in a new Heroes For Hire monthly (out this week!), by writers Dan Abnett and Andy Lanning and artist Brad Walker, and they'll talk late into the night - literally.

Just ask Aaron Yeboah of the Iron Fist Fan blog. Earlier this week we Skyped on the hype H4H has created, the line-up, who we'd throw against them and more. Now thanks to the magic of 'copy and paste' you can read how the whole fan-fest went down;

IronFist Fan (IFF): My expectations are very high, not just because of Iron Fist's involvement, but the title Heroes For Hire in general holds an iconic status in the Marvel Universe. This is the chance for the street level characters to show what they've got.

It's A Dan's World (IADW): My expectations come from Dan Abnett and Andy Lanning separating this from other 'covert team' books - fast. 'DnA' have hit runs on huge scale books like Legion and The Authority, so I'm keen to see how they bring that cosmic pace to the street.

IFF: Plus, how cool will it be having Iron Fist, Elektra, Ghost Rider, Punisher, Falcon and so on in one book? This is not about the big guns like Steve Rogers, Thor and Iron Man. This is the hardcore, 'I will do the dirty work' characters that we love. Unpredictable, hardcore, action-packed fun.


IADW: Falcon has been waiting for this kind of spotlight since Jack Kirby drew Captain America. I think he will be a scene stealer here.

IFF: Falcon is the heart behind writer Ed Brubaker's Captain America series. He deserves a spotlight in taking it to the streets.

IADW: This book will be sold on cast interaction, but can Falcon partner with The Punisher? And with Black Widow and Iron Fist on the team - how many 'leader' figures can one team hold?

IFF: Leadership will be a heck of a subject. None of these characters are subject to following leads. Initially I thought Danny deserves to be the leader since he and Luke were the original 'Heroes for Hire', but with a cast like this, even if he is leader it wont be easy for him.

IADW: I thought Iron Fist would be leader too initially, but now I think he'll be more like 'that name means alot to me from a great time in my life so I'm gonna' make sure you clowns don't disrespect it'.

IFF: He really shows a sense of leadership mentoring the new Power Man Vic, as well as leading The Immortal Weapons. Though Vic gives him a hard-time, he stays consistant making sure Vic makes the right decisions - I see him doing the same thing in H4H, making sure the team is strong enough to handle whatever task or mission.

IADW: Nice, then where does that put Punisher you reckon? A guy who won't listen, unless you are in an agreeing state of mind.

IFF: Punisher will always be Punisher. Nobody can change that. He will stick to what he has to do - which I know won't be pretty.

IADW: And also calling a spade a spade - he's the freakin' Punisher. You can't do a 'street level' Marvel book and not include him.

IFF: What about Elektra?

IADW: Elektra's less of a team player than The Punisher. She's one of the crew's ultimate weapons, but she's just to self-assured to let others watch her back. Though many men would die for the pleasure...

IFF: That is what makes me like Elektra. She is a cold-hearted ninja/assassin/spy that gets the work done - with no time for jokes.

I think she will only appear when needed or when she feels the time is right. Because of this I wouldn't be surprised if the characters (and even we the readers) will be left questioning her loyalty.

IADW: I've always liked her ambiguity in that way. Still the one possible interaction I'm really getting a kick out of is Elektra hanging with Ghost Rider. That just does it for me for some reason.

IFF: I have not actually seen those two together - you just brought my attention to it - so yeah, that will be something I will be delighted to look out for.

IADW: Who would you like to see in H4H?

IFF: Echo and Shang Chi. They really deserve to be part of this team.

IADW: Nice choices. My money would go on Deathlok and the original street kids; Cloak and Dagger.
IFF: I liked Deathlok in Jason Aaron's Wolverine run. He gave Wolverine one hell of a lot of trouble. What about villains?

IADW: At a flick I'd say The Mandarin. DnA are the ones to bring back the true head of The Hand. Then I'd also like to see the Heroes 'Injustice League'. A 'Villains for Hire' of the best street level villains Marvel has to offer.

What do you think about Brad Walker's artwork?

IADW: When I first spied Brad's work, I knew the dude was going places. A Guardians of the Galaxy later and his star's still climbing.

IFF: Yes, when I interviewed him, I could see his passion for the book. He admitted he is a fan of all these characters, so it will only be right for him to do justice to something he will want to read.
Heroes For Hire #1 dials in this week from Marvel Comics. Read the exclusive extended preview at ComicsAlliance.com - right after visiting Aaron at IronFist Fan!
Posted by IADW at 8:28 am