CREDIT WHERE CREDIT'S DUE: The Opening Sequence To 'Watchmen' 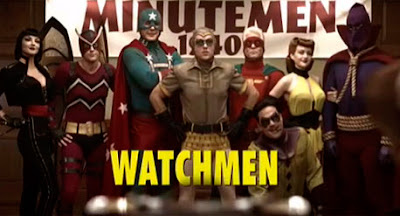 At the moment I'm currently flipping back through every comic that held my wallet to ransom in the last year, to figure out my annual batch of NAD awards. While the NAD's will be up next week, I thought I'd take a little moment to plug something that I think should've won allot more awards and acclaim then it did - the opening credits to 2009's Watchmen.

One of the things most fans were worried about in adapting Watchmen, was how such an extremely detailed and layered plot could be shrunk down into one movie bite sized feature film. The opening credits not only allayed this fear for it's duration, it perfectly set the feel of the movie, it's theme and the generation in which it was set.

It's a perfect short film in it's own right, just watching the moments of the Bob Dylan backed opening sequence gives me a hankering to sit down and re-read the source material all over again. A masterclass in film for it's type, why this wasn't given an Academy nod in an arena like film editing or cinematography truly has me asking 'Who watches the Watchmen?'
Posted by IADW at 11:02 am