For followers of this blog, me actually posting one of my own sketches was bordering on a sign of the apocalypse - right up there with sky falling and and a decent 80's adaptation in Hollywood. Today though, what I hope will be an ongoing feature finally kicks off - and no you don't need to pack up the house and head for higher ground. 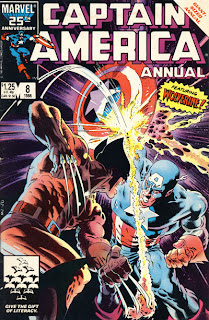 For my first sketch I wanted to do a tribute to the cover of Captain America Annual #8. My first solo Cap comic and one of my favourite covers ever by the ultra legendary Mike Zeck. I didn't want to just do Steve vs Logan though, I wanted to swap Cap's sparing partner out and with his flaming fists, Iron Fist was selected.

I doubt with mutual respect and a similar moral centre Danny and Cap would ever come to blows, even with matters of state vs matters of faith, but if they ever did, well; 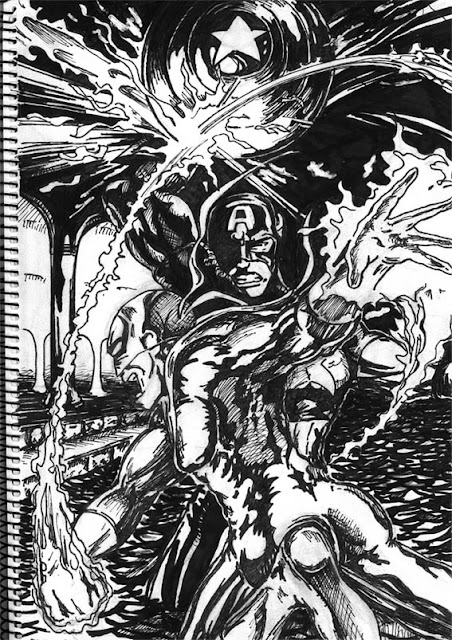 I still have to colour this (which I will update this post with before Friday) but I love B&W and wanted to chuck it up as is.

With each sketch I do I try to add something new I've witnessed from the real pro's, and with this one I experimented with going back and drawing with Twink (or whiteout for you U.S folk) after the ink has been layed down.

Originally I didn't know what to do with Danny's left hand, but in lighting it up to create another light source I realised I had accidentally created a Yin and Yang symbol of sorts, with the two power fists circling the heroes, and that's pretty cool.

As for Captain America, I wanted him standing still. That conveys a lot about the character and the strength of his actions, as well as showing him as a more experienced and less emotive soldier.

Right now for the Crayolas!
Posted by IADW at 9:41 am