2010 was a killer year for comics and not just for fans of the Deadpool variety. Rocket Racoon to Wonder Woman, every month had us soaking in great moments. Of all of those that made my jaw hit the floor, here are my nominees for the year's Best Moment In Cool; 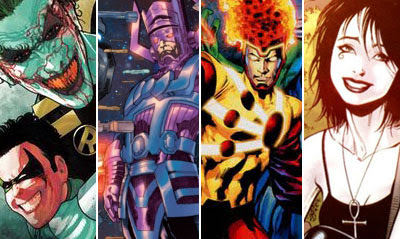 WINNER: Multi-mega industry sales-hogging spectacular Blackest Night needed to end on a bang and boy did it ever. From covering the comics medium in zombies to heralding a return to brighter heroes, DC almost turned the direction of the industry around single-handedly, with one massive Ivan Reis pencilled fold-out dream shot. (Click to enlarge).

Reverse Flash, Maxwell Lord, Hawk, Jade, Captain Boomerang, Firestorm, Martian Manhunter, Aquaman, Hawkman, Hawkgirl, Deadman and Osiris had finally (if not temporarily) returned.
What was even better was there was no warning this was coming. Rumours and speculation, sure, but nothing was leaked by DC or writer Geoff Johns, which left the big revel to hit fans with all the impact of a nail gun - doing exactly that.

What was your favourite moment from 20-10?
TOMORROW: The NAD Award for best new character of the year.
Posted by IADW at 9:00 am