Batman. Catwoman. Hawkeye. Comics are full of characters who it seems we could become if we just had an 'Iron Man' at our side or our wallets loaded with millions. Right now in Seattle U.S.A however, a group of community minded people dubbed the Rain City Superhero Movement, are turning that ‘we could’ into a definitive ‘we are’. 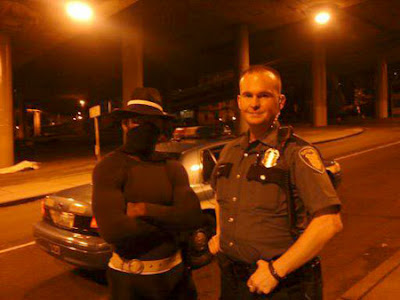 While police fear the heroes are putting themselves into danger, nine individuals have been noticed around the city, adopting names such as Green Reaper, Gemini, No Name, Catastrophe, Penelope and current public face of the Rain City Superhero Movement; Phoenix Jones - 'the Guardian of Seattle' (pictured above with an unidentified police officer).

Part of the nationwide Real Life Superhero Project, Jones, who police have identified as a 22 year old male, says his team are aware of what they are facing, noting that “Everyone on my team either has a military background or a mixed martial arts background, and we’re well aware of what its costs to do what we do”.

With one 'masked man' almost shot running through a park at night, Jones says he is making his costume more elaborate to end such confusion. His current look already sports body armor, a ballistic vest, arm and leg trauma plates — and a ballistic cup.

Still being a superhero hasn't proven easy. After Jones and five other masked allies (four male and one female) apprehended a threatening man with a golf club, police were forced to realise the suspect when none of the heroes could identify themselves in order to press charges.

The true star of the story though was found when police tracked the registration of the Kia Fate one of the heroes drives around in back to his godmother. When asked what her godson does with the vehicle, her response was simply; "He goes around doing good deeds". (via)