If there's a few dinero rolling round in your wallet post Christmas and you're thinking of adding an extra pull to 2010, here's three quick-fire reviews to help steer your spare change in the right direction. 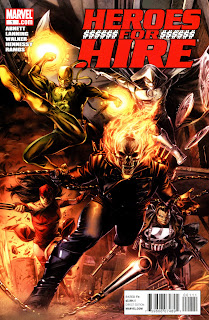 Any book that starts off giving The Falcon more wing-room is always going to go down well. Add to that a Black Widow that speaks more Russian than the obligatory 'dos vi danya' and a 'hit book' is almost dead cert.
With only two outta four heroes realising they are on the same Atlantean drug cartel-busting team, this issue offers a fresh take on a true Marvel icon. Speaking of which, the last page return of a 60's Marvel villain, long left for dust, will definitely leave you guessing at what (and who) comes next. ***** 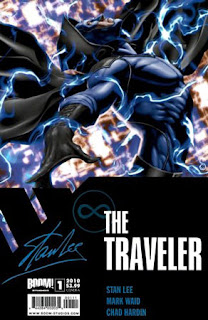 This issue needs one of those Wizard 1/2 logo's on it. Not because it will make it more collectible, but because, well the book is better read if you start from half way.
The Split-Second Men's first pursuit of a random member of public in the wrong place at the wrong time fails to grab on. The second chase by comparison, offers enough twists, mystery and backdrop to the use of time travel and Kronus (The Traveler), that you don't feel bad setting your alarm clocks to catch issue two. Love that Scott Clark cover. ***** 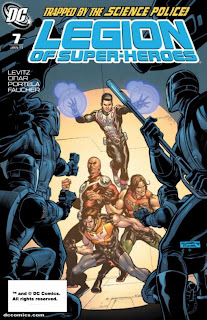 I know, I've done this book in almost every edition of Rewind Reviews. I don't mean to, but each issue is so good, I just want to stick a big neon sign on it's cover stating 'Hey world! This book's heating up!'
Stronger characterisation, alien shape-shifting hit squads, and a confrontation between Earth-Man and Mon-El that will have you cheering (depending on your flavour), Legion firmly shows Paul Levitz has finished wrapping up the plot threads of others, and is fully starting to swing with plans of his own. *****
Posted by IADW at 1:00 am