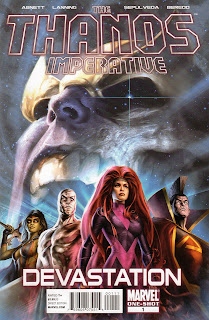 "First lesson in survival you learn in the Negative Zone... Never make threats you can't back up"

I hate epilogue issues. Generally 'epilogue' is publisher-nesse for 'That storyline did better than we expected, let's squeeze a few more dollars out of it'. Not so.

Infact right from the first few pages of The Thanos Imperative: Devastation, Miguel Sepulveda blows that notion and your eyeballs out of the water, with some of the most amazing art launching out of 2011. Seriously, make Blastaar look as cool as this and your career can only point up.

From there, the book quickly turns from 'epilogue' to bridging recently concluded mini: The Thanos Imperative and upcoming The Annihilators, using Cosmo - the telepathic dog - to explore the remaining riches of Marvel's cosmic cast. With Cosmo as your guide how can you not love the quirkiness of this book? 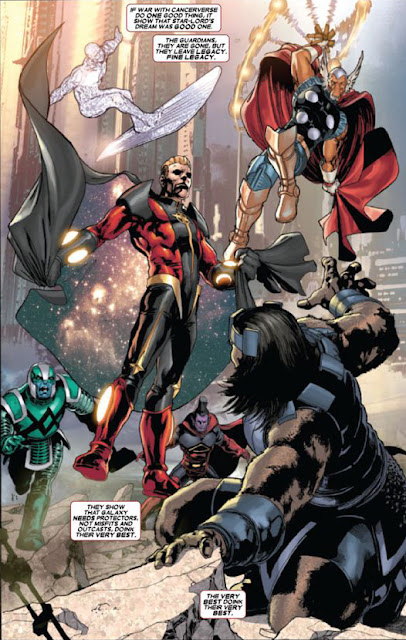 Drama, humour and action all in equal doses, while I was sad to see Century from Force Works wasn't yet squeezed in, the best exchange surprisingly comes from said psychic mutt and Beta Ray Bill, ironically on what people want most.

As the heavy-hitting heroes unite and writers Dan Abnett and Andy Lanning dust off 80's Marvel cosmic goodness, both bad and good, fans of true epic adventure have just had a warning shot fired across their wallets; The Annihilators are on the way.
Posted by IADW at 6:28 pm