If you feel 'In my day $3.99 used to buy more", welcome to Trading Post. Here each month, I grab secondhand comics with only the price of one modern comic to spend, then when all is done, I post up short reviews on the hard-won booty, like these right here: 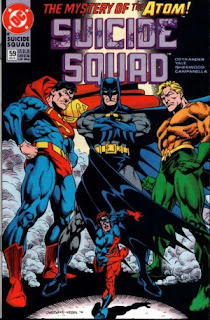 Suicide Squad #59
"Everyone I've killed had a father"

In the 80's if you needed dialouge that made you shiver - the one source that never failed, was John Ostrander's Suicide Squad. In this issue, that talent extends with the help of co-writer Kim Yale, to Batman, Superman and Aquaman, as the three heroes track the mysterious 'death' of their JLA teammate The Atom, right to The Wall.

Sure Count Vertigo tries to kill a comatose Poison Ivy, the Hayoth mistakingly feel they can execute a presidential arrest, Deadshot rubs everyone the wrong way, and Barbara Gordon has a frank (and long overdue) discussion with Bats re: blindfolds and batcaves - but where Ostrander really takes charge is with Aquaman.

In a mere few panels, and aided by Geof Isherwood's strong pencils, he brings the Sea King on stage dramatically and powerfully, standing him as an equal in this 'Justice Trinity' and not as some third wheel, as the 80's were sometimes inclined to do.

Dodgy morals, dodgier characters, secrets and agendas - this folks is what makes The Squad required reading. ***** 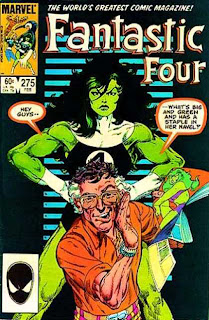 Fantastic Four #275
"Well not so fast bright boys! She-Hulk would like a few words with you!"

Now my run of John Byrne's Fantastic Four is complete. Yip, the only issue I originally missed is the infamous 'She-Hulk gets photographed sunbathing topless' issue.

While the issue is mostly set to inject abit of humour in between all the godlike children and teammate affairs that were going down at the time, an issue of any title dedicated to Shulkie is never a bad thing.

Inspired by Kevin Nowlan, John probably lets the gag run a little longer than it should've, but the epilouge reminds readers of all the big plots still on the boil, just in time for the Human Torch to drop in with the ultimate in news for the Jade Giantess. *****
Posted by IADW at 9:26 pm