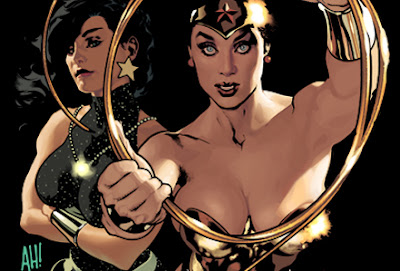 Okay, so last post we sorted out Comics Top 5 Bromances, but what about the other side of the spectrum? Females whose B.F.F. never lets them down (hence the title). So let's take a mo to sit back and honour the ladies who prove 'girl-power' is nice for pop groups but it's women power that saves your bacon, with the Top 5 Comic Book Shemances.

5) She-Hulk and Invisible Woman: Two of the longest serving forces of the Marvel U, Susan Storm and Jennifer Walters have opposing powers that bely their friendship. Sue's powers make her fade from sight, while her former team-mate's make her even more prominent!
4) Wonder Woman and Donna Troy: Okay so they are kind of sisters but 'kind of sisters' still count! While the Amazonian duo are a pretty well balanced pair, Diana the warrior and Donna the nurturer, few are the foes who would stand against both!

3) Black Canary and Oracle Sure Babs was the best Batgirl ever and Dinah got jipped out of what would have been a stellar run as head of the JLA, but together these two ladies use their rock solid friendship to administer justice where other heroes miss. Kicking tail and ensuring no one ever falls victim to a sinister bird of prey.
2) Poison Ivy and Harley Quinn Hey, even the criminally insane need a good mate or two! Pick your poison, pick on one the other gives you get a mallet to the head, pick on the other and her mates gigantic triffod eats you for brunch. Harley and Ivy are by far the craziest girls in the town, cracking hearts and bank vaults in their wake.
Click on through for the #1 female duo...
1) Storm and Jean Grey 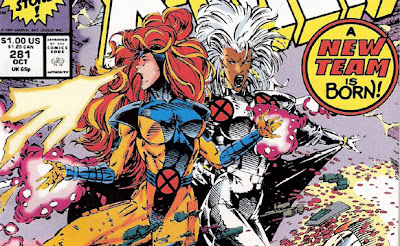 Back when I read X-Men, one of the core elements of the franchise was the friendship between Ororo and Jean - heck it was even what pulled the team together after the divide at the formation of X-Factor.
The two forces of nature have guided each other and the battle for mutant rights through some of the darkest patches yet. Versus Magneto or Shadow King, or lead by Professor X or alone, as long as Phoenix and Storm can turn to each other there is nothing they can't overcome!
Posted by IADW at 9:00 pm