Splash pages, you gotta' love 'em. A blank canvas where the artist can hit the reader with a large dose of illustrated 'wow'. This Friday, a trippy Frank Cho double page splash, where he pours his talents in rendering the female form over one of Marvel's best (Don't make me point her out to you) (click to enlarge); 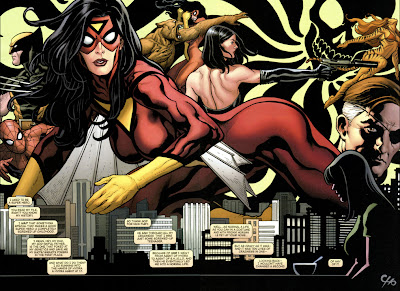 When Hawkeye was killed off in Avengers Disassembled I was pretty peeved. Despite the fact that comic deaths last as long as the average teenage tantrum I was pretty adamant I wasn't picking up New Avengers as a result, and would teach Marvel a lesson by withholding my $3.50.
Then the preview art showed Spider-Woman was part of the new membership, I decided Marvel had been in the naughty corner long enough, and was now aloud out.
To find the 14th issue dedicated to continuity fixing the life of Jessica Drew and rendered by a 'cheesecake artist' like Frank Cho, well it was like our little spat had never existed at all.
Posted by IADW at 9:00 pm