"No, I'm hoping old friends remember it's better to stay on my good side."
Using the neutral King Midas as a lead back to The Undergroud, an all-points junction now haven to the worst society has to offer, Zack Overkill wants Simon Slaughter and Level 9 to know he's gunning for them, but The Underground ain't no turncoats messenger service. 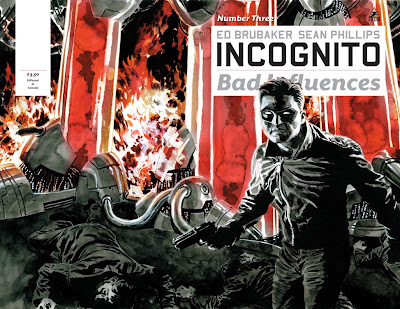 While I'm pretty sure Zack's flip against his former criminal buddies is more for the taste of Zoe Zeppelin then any world saving notions, Incognito: Bad Influences #3 steps up with some brutal home truths and insights into the code of honour between worse than thieves, that only the minds behind Criminal could bring.
While the fate of ol' Midas is pretty much what you'd expect for leading Zack down the right path, a new avenger in the garb of the original Lazarus stalks the streets. This one however doesn't just punish the guilty, but also the grey - those whose 'blind eye' allows the actions of the evil to fester and grow.
Since no one is more dipped in grey than a super-criminal reformed, now trying to break back in to his old circle for SOS intentions, Lazarus has Zack in his sights and bodies in his wake - a fresh one falling with every step. But Lazarus has even more reasons to come gunning for Zack and only Zoe Zeppelin knows why. 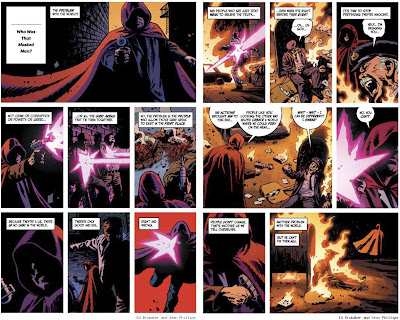 As if the character names in this book weren't all you needed to be hooked, Ed Brubakers twist-ful plot shines with little details (the Christmas decorations) and the various characters inner motivations, ones so dubious you don't know what way anybody is going to flip.
The art of Sean Phillips again could carry the book on it's own. Even if Ed's words were omitted in a printing botch-up, the story still wouldn't lose any of it's grip or pulpy goodness - the guy is that good.
Incognito: Bad Influences is from Marvel's creator owned Icon imprint, and as the cover itself says "$3.99 - Different In Canada".
Posted by IADW at 4:49 pm