BUY THAT MAN A BEER: Waid, Rucka and Williams on Marvel's #1 Trifecta 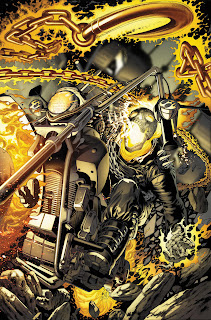 This weekend Marvel shoved a whole lot of cajones behind some of their oldest names, declaring new #1's for three heroes who are no strangers to having debut issues - this time backed by some pretty serious firepower.

Like a bat outta hell, my pick of the three has to be writer Rob Williams landing the new Ghost Rider series, after his Shadowland based one-shot special of the character. In that book, Rob had the Spirit of Vengeance throw a bit of a chin-wag with God from here... 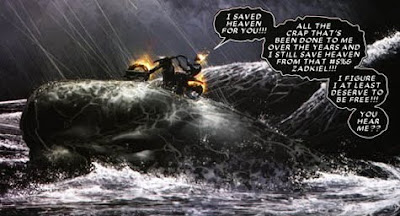 With this kind of thinking at the throttle, the new adventures of Marvel's "supernatural weapon of mass destruction" really ought to tear up the roads ahead.

As for the remaining new releases named, here's some teaser images as well as quotes from the new writers on just what makes that character tick.

Greg Rucka's Punisher, in August with artist Marco Checchetto raises eyebrows. Greg is one of the best crime writers out, and it will be interesting to see if the man who usually takes a bit of set-up before he shifts gear, can come out all guns blazing with his more focussed Frank Castle.

Karl Kesel tried to ease back on the noir of Daredevil and rely more on the attributes of his namesake, and now Mark Waid looks set to trip those same steps. Lightening up Matt Murdock (let alone shifting his base of operations) must be a que for Jaws music in comic book writer world, but I have to admit the idea of seeing stunt-happy Matt tackle Klaw, Vulture and Electro does get my spare change jingling.

Buy That Man A Beer covers the best quotes from the pro's and public on pop culture. Click through to the CBR interview's that gave birth to these quotes here (Williams), here (Rucka) or here (Waid).