If you're a vigilante in the DCU you are gonna come up against Batman. Heck if you're a hero you're even probably going to take a pop-shot just to see if you can beat the bat. Deadshot, being the dude with a deathwish that he is, not only tries his hand at the title, he keeps going back for seconds. Here are the four meet and greet moments of the pair I like best; 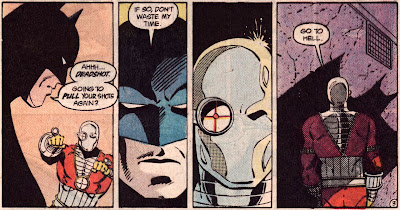 I love the silent panel of respect which hints at Deadshot actually respecting Bruce and having a heart. Well, one outta two ain't bad. 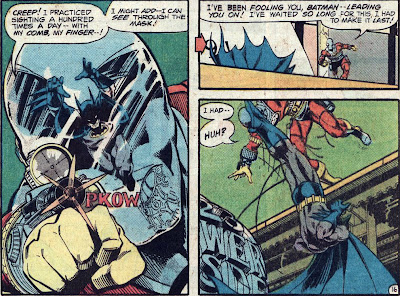 Pre these panels, the 'Shot still in his mouthy days, was spouting off left and right. How does Bats silence him? Judo move to the throat. Yip, that'll do it every time. Plus the reflected Batman leaping image is just to sweet for words. 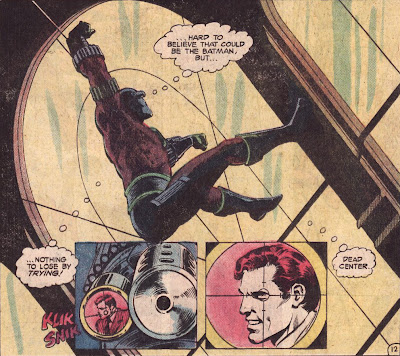 If you've read this issue you know there's more to this scene than meets the eye, but trim it down to these three panels and having the man who never misses lining up Bruce Wayne in his sights makes for one hell of a page-turner. Could victory over Batman be this simple?

For the number one meet-up between Batman and Deadshot click right on through folks...

Okay, so it's Deadshot's list and most of them have Batman win, but a) it's Batman, and in this case b) what a win! Not only is it hard not to crack a laugh reading this little gem, at least now Guy Gardener and Deadshot have a little common ground.
Posted by IADW at 7:09 pm