Thirteen maybe the unlucky number in many cultures, but it's the golden number for comics most recognisable and potentially untapped super-team, as Warner Bros have announced to the LA Times a script for Justice League the movie is underway, ETA; 2013. 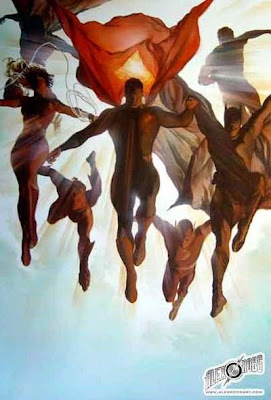 While they have also announced plans to "reinvent" the Batman franchise after The Dark Knight Rises and League spin-off movies for both Wonder Woman and The Flash, my mind is still stuck on how awesome it will be to fork out a few dinero and see DC's leading icons, in live action, in the same feature film - and what that will do for the real world awareness of the League as a concept, beyond the Super Friends.

Getting Alex Ross in to help with artistic direction would be a sweet move too. The man's love of the JLA knows no bounds and as shown in the above painting, he's obviously been thinking of a teaser JLA movie poster as it is.

Initially my hopes are for a ultra-streamlined roster, so each hero gets a decent whack of screen time. Although with Steel, Black Canary, Vixen, The Atom and more in the wings, there sure are plenty of great choices on top of the 'Big 7' (Did someone say Shazam!?).

Who would make up your big-screen Justice League?
Posted by IADW at 12:11 pm