Having no actual comic shops in this city it took a little longer than most for me to realise that Wizard Magazine is no more. Sure it was never a source of consistently hard hitting journalism, but it was good for the odd chuckle and an awesome preview or two. 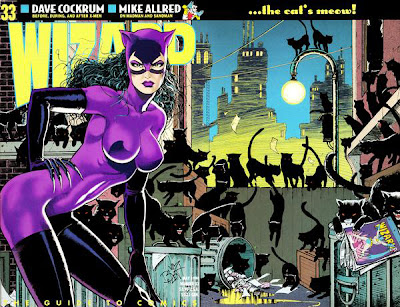 Here Wizard retailed for around $14, meaning I could grab four comics or an issue of a magazine designed to try and get you to buy more comics, albeit with a slightly Marvel based slant.

The tool that made that ratio work in their favour? The cover art. Top artists doing their signature characters or characters you may never have seen them touch. Material like that you just can't walk past.

My favourite memory of that - the time Jim Balent took to the cover of issue 33 with one of the greatest Catwoman images ever (were even a kitty reads Wizard) and issue 34.... 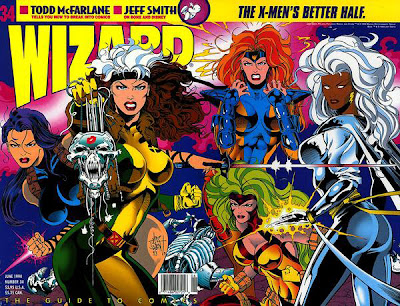 Not only does Psylocke push spotlight hoggers Storm and Jean to the 'fold around' side, I think of this image as the definitive Rouge shot. That kiss on the robot's skull - flawless.

What is your favourite memory of Wizard Magazine?