Finally, the day of days has come – today I see THOR in 3D. While I’ll probably fork out a to see it a few times before it bolts the big-screen forever, here are the five things I want to find when I grab my popcorn and soda, and bunk down for a long overdue Thor-fest.

5) More Avengers While the Scarlet Witch would tie nicely into Asgardian lore, it would be awesome to see Thor brake a few more screen virgins ahead of the upcoming Avengers film. My top candidates include Hawkeye, Wasp and giant-size hubby Hank Pym.

4) Subplot Villains True, we’ve got the Destroyer, Loki and Frost Giants, but what's to stop a few more slipping their heads in to build continuity between Thor's? Lethal ladies like Hela and The Enchantress get my votes as a decent place to start. And then there's Thanos...

3) Thor Unleashed Okay this is a given, but to what scale? Thor is the Thunder God – so here’s hoping we see it, with a showdown that sees lightning reign and winds that topple buildings and more in the name of peace. Forget 10/10, let’s turn that kick-ass-ometer all the way to 30.

2) No Key Deaths Here’s hoping no cheesy deaths happen in Thor movie numero uno to stop key players popping up in future sequels. The power vacuum left by Odin is a well travelled path, but with ol’ Hannibal Lector Anthony Hopkins adding so much weight to the cast, let’s leave that storyline 'till the very last huh?

1) THOR FROG Don’t be shy, you know part of you wants to see him too. No doubt coming soon to a Cartoon Network near you... 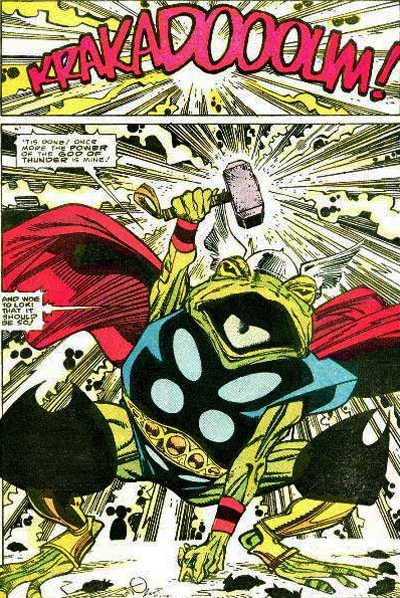