HELLBOY AND THE AVENGERS GET INKED: Tattoo Art Of Earth's (And Hell's) Mightiest

Mike Mignola - he's one sun of a gun whose style with an ink pen is identifiable at fifty paces. With tattoos also drawing on the artists talent with the old ink-pot, I thought I'd see if Mike's signature dish Hellboy, looks as good served up with the ultimate permanent marker as it does in 22 pages of comic book gold... 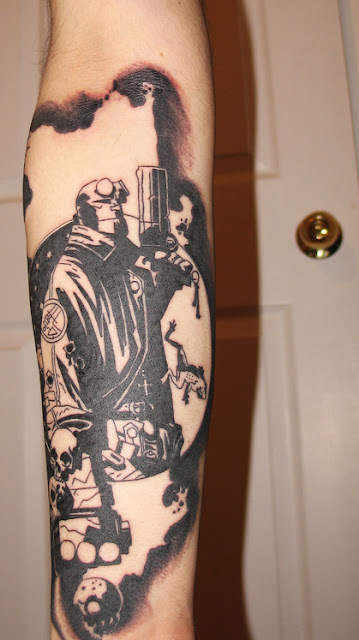 ...Yip, I'd call that a win - and a pretty damn impressive one at that.
Not to be outdone, here's initial photos of a man dedicating his whole arm to the updated looks of the original line-up from Avengers #1.

Iron Man, Thor and Ant-Man. While The Wasp and Hulk are still to be presumably slotted into the sleeve (and Cap too if he's not to fussy on continuity) wouldn't ya want Hank Pym on your arm as Giant-Man? Hank popped into that suit in issue #2 and it would make a pretty sweet image, towering from wrist to shoulder. Just saying is all. (Via)
Posted by IADW at 4:48 pm