If there's a group in comics that need a telethon, it's the rouges created by writer Grant Morrison. He pours some of the most amazing foes four colour print has ever seen into his scripts, only for some to be tripped over by other writers or avoided, almost like they never even existed. I tell ya' it's enough to make a Scotsman see red.

Posterboy for the whole campaign should there ever be one? Prometheus. The man who vowed to "annihilate the forces of justice" in revenge for cops killing his criminal parents is a top class act, and a damn arrogant one at that.

Of course sneaking on board the JLA satelitte base during a media conference and taking down the League with an almost 'paint-by numbers' ease is always going to lead to a showdown. And when you're dubbed the 'reverse Batman' you don't have to be a mentally disturbed millionaire with a utility belt to figure out who with. 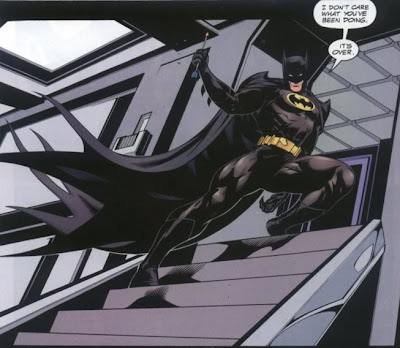 Yip folks, one of the cool things about Grant and artist Howard Porter's JLA run - the pair knew how to make Batman kick. To bad that can't save you from a guy who... well let's let the dude boast for himself... 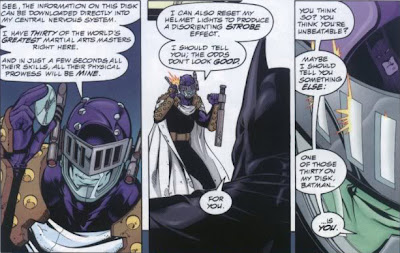 Many folks smirk at Bats, few are standing seconds later. Not the case in JLA #16 though. As the duo face off, the current Wonder Woman tries to load the media guests onto shuttles back to earth, while Green Lantern (Kyle Rayner) and Flash (Wally West) scout the darkened corridors of the now orbital death-trap looking for their latest adversary, only to find he's come looking for them.

As the doors slide open in front of them and Kyle's ability to will his ring to work cuts out, even Prometheus's taunts fade to black. All the then 'rookie heroes' can think of is the sight before them... 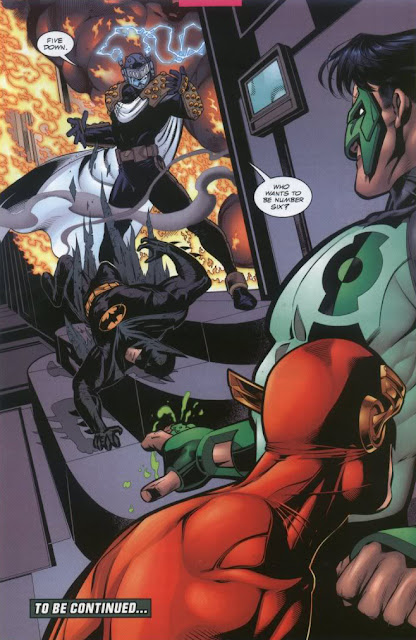 Batman's down? Someone better have Black Canary on speed dial...
Posted by IADW at 4:17 pm