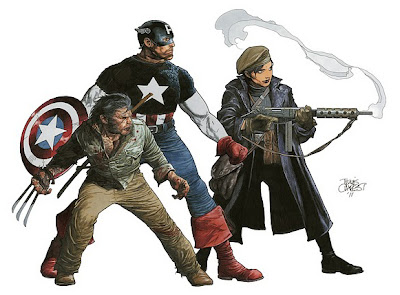 Travis Charest on WildC.A.T's was one of those rare instances where you not only were scared of damaging the pages for non-collector based reasons, but when you saw how he rendered Grifter and gang, you were set he was going to change the comics illustration game for good. God if only.

Now Travis after a bit of a less high profile focus on his own creator based work Spacegirl, has got a project on the go at the House Of Ideas, and it features not only Cap but Wolverine - dropping the pair smack bang in the middle of the 1940's for a decent chunk of the adventure.

A Charest fan through and through, my wallet is already sucking up spare change in preparation for it. For more check out Travis's website!
Posted by IADW at 9:31 am