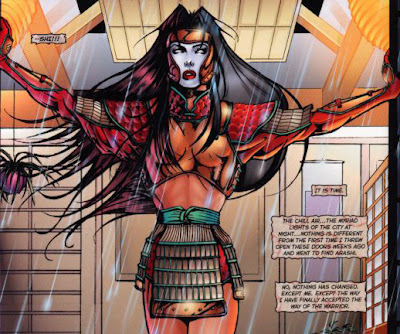 As a comic fan who survived the 90's collector mad market, you can  find yourself wishing you'd spent more money on that Nirvana/Spice Girls/Jim Carrey Movie collection you had going, than running after the latest foil covered, die-cut, poly-bagged edition of DeathDeathKill #1.

Still, not all of the 90's was bad news, and this week I'm going to take a look at seven things from the decade of nine-o that make me feel just a tad bit nostalgic (by the way if you finished that 'nine-o' with 'two-one-o' then you're probably well ahead of me on that path). 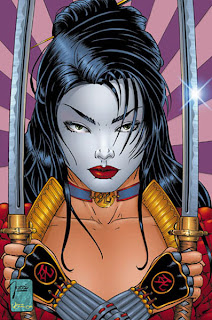 If 90's comic book heroines had more than an inch of material to their costume or a semi-sunny disposition, it was grounds for instant dismissal. However, while the anal-floss wearing 'Bad Girls' kicked, jumped and killed their way through the hearts of fans, one managed to combine the fad with a decent amount of story - William Tucci's Shi.

Shi: The Way Of The Warrior, from Tucci's own Crusade Comics, saw Ana Ishikawa's tumble into a war between sohei warrior monks, born on the back of witnessing the death of her brother and father. Killed by a Yukuza named Masahiro Arashi, Ana uses the coins placed on her fallen familes bodies - marked with the kanji for death, Shi - to create a new persona guided by the demon of rage inside her.

As Ana sets out on a path which illustrates why 'Shi' is the literal translation of 'Death' in Japanese, she soon finds herself at a mental crossroads with her vengance, the ways of her Sohei ancestors, and the Catholic values of her American Mother.

See? Shi wasn't just pretty pictures - though it had it's share of those too. With Billy himself behind the pen, Shi was unbeatable. His work carried a strong oriental feel, with clean fine linework, strong compositions and incredible detail, especially in the flashbacks to medieval Japan. As a fan of any mythology I ate this book up. 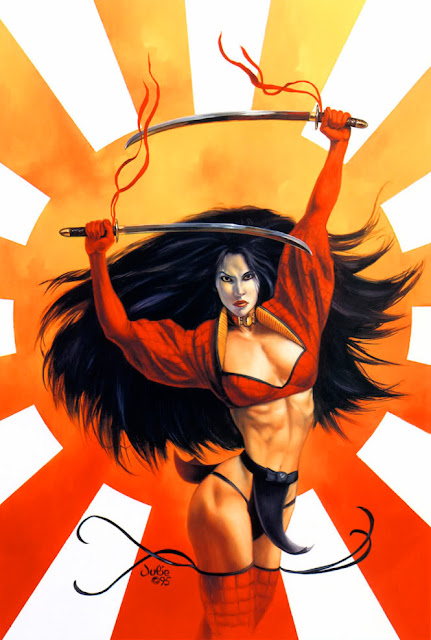 Sure there have been alot of watered down follow ups that have drifted under the bridge since those early days, but as Dark Horse showed not so long ago, you can still cut back on the T&A and find yourself with a gem of a concept. With Billy himself recently saying Shi will be revamped later this year for the 21st century, we can only hope.
Posted by IADW at 9:00 am