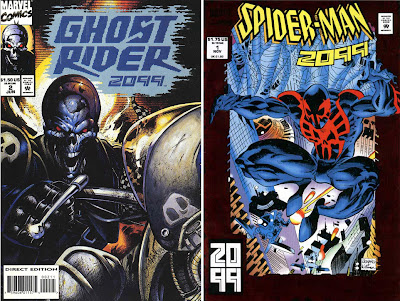 It's a well trodden path in sci-fi, that if you have a cow you can milk to death in the present, shoving it into a futuristic field means you can obtain more moolah from the same group of fans, and maybe even round up a few more in the process.

In the 90's Marvel did just that by chucking some of it's best into the year 2099. While some proved even a futuristic turd still steams, Spider-Man 2099 and Ghost Rider 2099 especially showcased just what prime beef the concept was.

Addicted to the drug Rapture by his employers when he threatens to quit over human trials, Miguel tries to download a saved drug-free version of his DNA profile, only for it to be sabotaged, mixed with that of an arachnid. These abilities turn him into Spider-Man 2099.

Writer Peter David's run on Web of Spider-Man is my top Spidey-stint ever, so following him into the world of 2099 was a no-brainer. Armed with the criminally underrated art of Rick Leonardi and one of the best wall-crawler wardrobes of all, Spider-Man 2099 twisted the Spidey stereotypes just enough to make the book feel like a Spider-Man title, but still fresh and new at the same time.

As an example, classic Spider-Man is shy Peter Parker and mouthy arachnid avenger. In 2099 Spidey is almost an ass-kicking mute, yet Miguel O'Hara's mouth was the 90's best source of spider-humour. 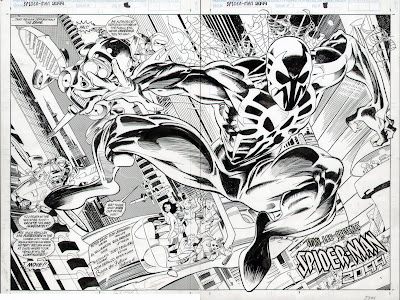 Wicked huh? While Spidey was the flagship of this Blade Runner like world of 2099, the real grit stepped was over in Ghost Rider 2099 - drawn by my man; Chris Bachalo.

Written by Len Kaminski, the series had a Grant Morrison-ish feel to it, with one-liner futuristic concepts scattered all over the page and plenty of attitude and ass-kicking in between.

The title characters origin proves what a head-rush for your imagination the book was; Kenishiro “Zero” Cochrane is a hacker who is shot after downloading corporate information into his brain. Uploading his mind into cyberspace through a payphone, he gets 'picked up' by the Invisibles and agrees to fight corporate power in exchange for being put into a Ghost Rider robot body, with hover-bike and wait for it... chainsaw hands. 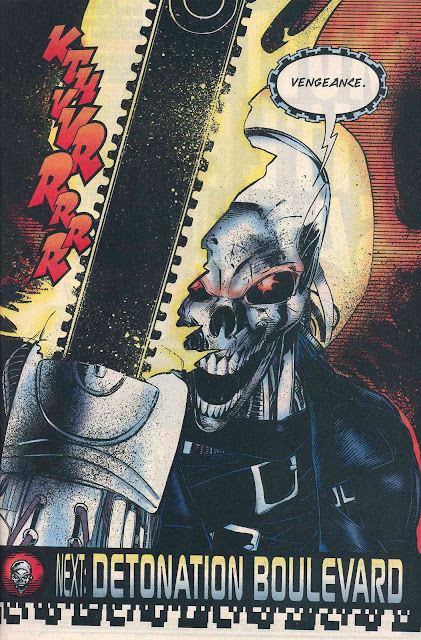 Yip, even in the future when you have a dirty job to do, the chainsaw is still a freakin' awesome weapon.

The first handful of issues with the top creative team in play are golden. Thanks to them, Cochrane stood out in a sea of bad attitude comics, with a death-wish, a hate of authority and an axe to grind against 'the system'.

Grab the early issues of both these series' if you can. With video games and movies desperate for comic worlds to exploit, it wouldn't surprise me if they both rear their heads again soon.
Posted by IADW at 3:40 pm