Sure in the 90's the Avengers sported leather jackets for africa, but hey - how can you knock a book that started with the larger than life storyarc of Operation: Galactic Storm and ended with one of the ultimate comic creative teams ever assembled? 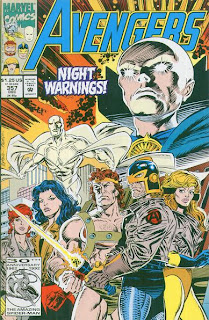 A massive crossover even by todays standards, Operation: Galactic Storm didn't just split the once always assembled forces of earth's mightiest over the decision to eliminate the Kree Supreme Intelligence 7-8, it caused a massive game of musical chairs across the Avengers line. A few months later the core title refocused around a new 99% 'classic free' team of Black Knight, Crystal, Sersi, Black Widow, Hercules and The Vision.

While Cap still occasionally popped in, Widow's ways of directing the team differed and a love square was raging between the temperamental Sersi, Black Knight, Crystal and Magneto's son Quicksilver. Drawn by long time artist Steve Epting, it was gritty character driven stuff that showed the Avengers didn't need Iron Man to shine.

Vision (my favourite Avenger) reverted to his green and gold's, Hank Pym showed why a Giant Man always comes in handy by returning to the fold, and storyline Bloodties ran the team smack into the X-Men and the chaos caused in Genosha in the wake of a comatose Magneto.

As the love square exploded in sensational style against the forces of the alternate reality villain Proctor, internal ignorance of the West Coast Avengers saw their sister team (who during all this had been having their forces depleted and pitted against their own series of hells) quit the roster and formed a proactive defense team of their own; Force Works (What happened to Century anyway?) 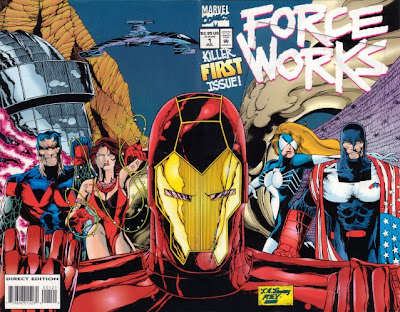 Force Works wasn't the only spin-off making waves. Marvel was flinging changes and chances around the Avengers Mansion like there was no tomorrow, making it more of an unpredictable read than the heavilly editorially scrutinised X-books hogging the charts at the time.

Mark Waid and Ron Garney's reworked Captain America made him the buzz character of the industry and Warren Ellis wrapped his hands around Thor. Sadly with Heroes Reborn the brown jacket club of Avengers were replaced by the 'Big Guns' (which seamed less of a football team then those that chanted the crews battle cry before them) as the team from Image Comics tried to update Marvel's oldest stars.

Jumping over that deviant bridge quickly, the House of Ideas made one of their best backtracks, restoring Waid and Garney to Cap and placing the now legendary duo of George Perez and Kurt Busiek onto The Avengers. Together they knocked the ball out of the stratosphere every month, by nailing what so many before them had tried; assembling the A-list and giving each room to shine.

Cap in an alternate reality freed Hawkeye from entrapment first because his desire to be an Avenger was the strongest, Scarlet Witch's love returned Wonder Man to life and sparked a triangle with The Vision. JLA wannabes Squadron Supreme dropped in for a tussle, Beast bounced in and the ultimate Avengers line-up ended the decade in the ultimate battle against an army of Ultrons. 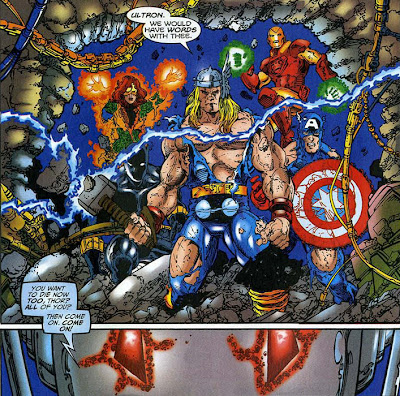 That scene still screams 'ass-whipping ahead' in eight different languages. Sure not all the Avengers teams of the 90's were 'golden' but that's not necessarily bad. It was a book (or line of) where Earth's Mightiest consistently had to prove their name - and did.
Posted by IADW at 2:19 pm