I’m going to flunk school – I just can’t get into the hype of upcoming flick X-Men: First Class. Odd, considering its line-up is full of quirky odd-beat characters, and that's just the type of X-team I like. God knows I can't stand looking at a book where it seems like Xavier only trusts the war for mutant rights to the Swimsuit Illustrated crowd.

Not only is 'difference' one of the core themes of the franchise, I want read about X-Men who actually look like X-Men (those ones mainly have the most interesting perspectives anyway). So my friends, let that serve as a loose enough segue into the obligatory post; the eight who make My Dream Team X-Men! 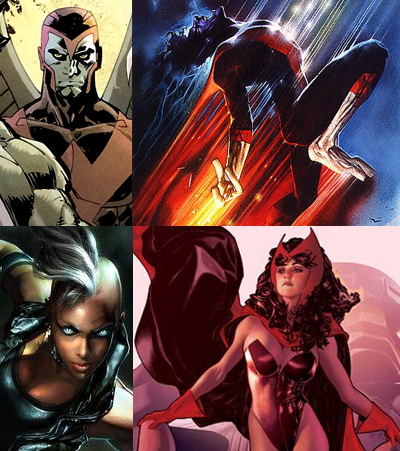 ARCHANGEL An original X-Man, Warren is the team's financier and heavy-hitter. He also allows them to infiltrate the mutant hating side of society's wealthiest, busting mutant slave rings, sweatshops and more.
NIGHTCRAWLER One of the best comic creations ever, Nightcrawler's strategy, faith and positivity make him the perfect leader of this team, and communicator for mutant rights to the wary public.

STORM Kurt's 2-I-C, when Ororo desires to re-hone her skills, most think it's as an elemental powerhouse. Rather a re-mohawked Storm steps forward, dealing with matters in a more 'hand to hand' manner.
SCARLET WITCH With each X-revamp I’ve waited to see the daughter of Magneto pledge her experience into combating both the fascist elements of both homo sapians and mutantkind - forces like her father. 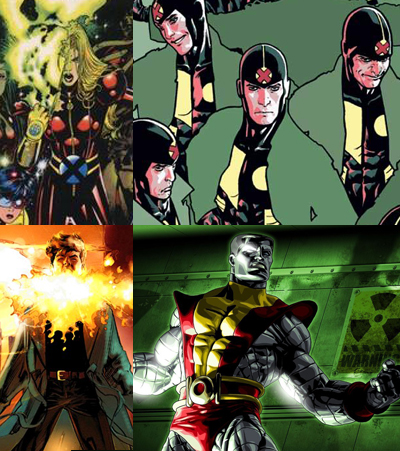 HUSK Trumping Firestar for this spot, Paige's brother Sam gives her a Hellion connection too, but with her ability to shed her skin not limited to revealing human forms underneath, she is way more versatile.
MULTIPLE MAN Who doesn’t dream of having Jamie Madrox's powers? Using the name Multiple Man (as no good codename should ever go lonely), one man army Madrox is invaluable in balancing the odds.
CHAMBER A descendant of Apocalypse, Chamber and Archangel would make for awesome 'beer buddies'. Re-powered, the ‘untouchable man’ would seek to rekindle his relationship with Husk.

COLOSSUS In my first Uncanny X-Men comic, Colossus was the only character I dug. Loyal and optimistic in an angst ridden, Pete's strength of character has rarely waivered. Plus he’s a giant man of metal - you can’t get better than that!

So that's my Dream Team of Eight! Who makes up yours?
Posted by IADW at 4:49 pm