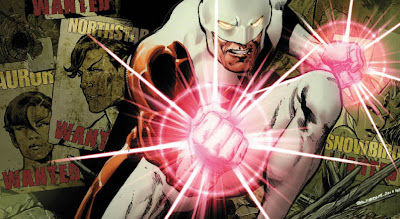 Despite having one of the most diverse and interesting line-ups in comics (let alone 'Alpha' in the title) Alpha Flight has rarely been Marvel's top dog.

Now, with a Rolling Stones type reunion of the main cast and a creative team which teases names like writers Fred Van Lente and Greg Pak, as well as artists Dale Eaglesham (the only Cannuck on the crew) and Phil Jimenez this is personally my most anticipated book of the month.

Kicking off with a .1 issue, the team soon to be branded traitors to their own country are set against Attuma's forces - and Snowbird turns T-Rex. Yip believe it folks; Anything and everything can happen with Alpha Flight (click to enlarge).

*Sigh* Why can't my boss request I draw double page spreads of giant fish men laying waste to a city? He's such a wet blanket.
Posted by IADW at 3:03 pm