LEST WE FORGET: Revive Daimon Hellstrom

Despite having a first class ticket to ride, some of comics best characters and concepts miss the train departing and often get left to aimlessly wonder the platform, dead or even worse all but forgotten.

Fortnightly in Lest We Forget, I pluck one of those comic-limbo-lingerers from the station and pimp their need for a comeback. This time around it's ironically the Son of Satan himself; Daimon Hellstrom. 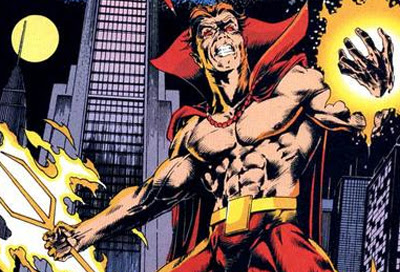 In the early days, my top heroes both wielded pitchforks. Over at DC it was the trident of Aquaman and at Marvel it was Daimon Hellstrom in the pages of The Defenders (Sure he's been called Hellstorm at times, but that's too 90's for my tastes - 'Hellstrom' has more class).

WHY HE IS COOL: Burn, Family Tree Burn
While his sister Satana has embraced her dark heritage, Daimon has clung to that from his mortal mother, in an effort to fight the forces of his father's devilish realm. With his mother institutionalised over the true identity of her partner, Hellstrom found a similar fate in his love for Defenders team-mate Patsy Walker - Hellcat.

As the two successfully reclaimed Hellstrom's stolen 'Darksoul', Patsy was driven insane by the sight of such evil. Tormented at having brought such darkness back into the world, Hellcat took her own life. Later as Lord of a realm of Hell, Daimon tricked Hawkeye's Thunderbolts in the name of love, by having them think they were saving Mockingbird's soul, only to have them revive Patsy's. 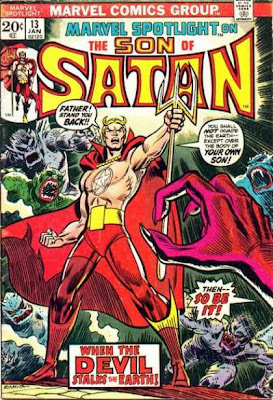 Plus in the ultimate touch of cool, Hellstrom rides a chariot drawn by three flaming hoofed horses! No character with a visual as cool as that can stay buried for long!

HOW I’D KEEP HELLSTROM ABOVE GROUND: We need more decent horror comics and no one has a better arsenal in this area than Marvel. Lead by the Son of Satan's hellfire abilities, I'd assemble the ultimate 'Suicide Squad'; a team of deceased villains and dishonoured heroes, who battle his sister and other arcane forces, in a last ditch attempt to live once more or die with honour and finally achieve eternal peace.