Forget the massacre of fan wallets that lay ahead, DC top brass must be taking another leaf out of Hannibal Lector's book, and kicking back after the breaking of today's news to toast all it's awesome possibilities with a nice Chianti.

52 brand-spanking new #1 issues will re-launch the DC universe to readers new and old this September, no easy feat when you are talking about characters, titles and universes that have been around longer than many of us have been alive. 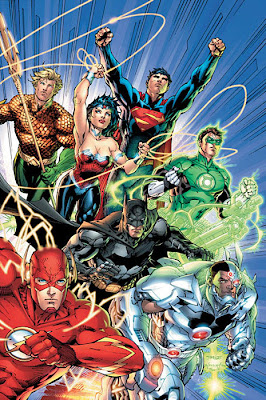 With a 'all-star' Justice League #1 leading the charge, by writer Geoff Johns and artist Jim Lee, I wouldn't be suprised if this isn't the only dream creative team meets concept combo waiting to be announced (Go Cyborg)!

Sure change 100% approved in comic-fan-land is as rare as a hair follicle on Lex Luthor's head, but the possibilities of concepts this presents is just to wild to let that emotion stand in the way - especially from these early stages.

How we can best be a part of it aside from the excitement? While DC mainstays like Batman and Green Lantern will no doubt nab more than one book and have it walk out the door in sales - just think about who will fill the remaining spaces! New characters. Old characters who had great titles. Experienced characters who've yet to have the honour...

This is your opportunity to get behind the ones you love, stick around after the #1-mania wears off, and show DC there's enough ground support behind this guy, gal or group to leave the power on and keep that series printing.

Key hits on from Justice League for me include;
• Aquaman by Geoff Johns and Ivan Reis
• Grant Morrison - back on Superman
• New Warriors scribe Fabian Nicieza on Teen Titans
• A new Hawkman #1

First Flashpoint, then this? While I will be blogging on this quite closely, DC's old tag-line used to be "The New DC - There's No Stopping Us Now!" Suddenly after today's news, it's not just the characters that seem new again.
Posted by IADW at 5:40 pm