COMICS THAT MADE ME A FAN: 'Optimus Prime Autobot Killer!' - Transformers #12

With every man and his Ravage currently checking out the latest Transformers blockbuster, I thought it was time to pay tribute to a true piece of Generation One coolness, one that is partly responsible for the comic-nut I am today. It's Transformers #12 of the 80's Marvel series, and it has everything - but you can tell that from the cover can't you? 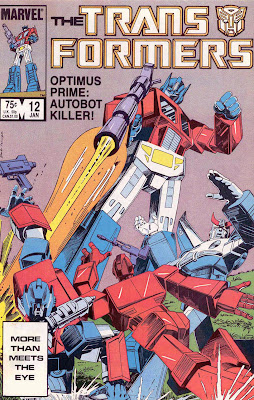 When I was seven I was about to swear off buying comics (not literally - Mum would've killed me). DC had disappeared from the local shelves and while our grocery store still carried four Marvel titles, it was really only the Transformer-ish Iron Man that stopped me from diverting all my hard earned pocket money to saving for Dinobots.

Then, between home and school one day I stumbled into a Ma and Pa type bookstore, where this cover screamed at me from the stand: 'Optimus Prime: Autobot Killer!'! Even if I brought nothing else all year, I had to read this comic!

What I found inside kept me collecting comics. Not only that, it is a prime example (no pun intended) of why comics rock; They can (and do) tell stories other mediums won't.

Inside, an Autobot scouting party are surprised to find Jetfire supposedly dropping the object of their search into a nearby swamp; the captured head of Optimus Prime.

Retrieving and reattaching Prime's likeness to his body, the Autobot leader suddenly opens fire on his former allies, starting with Prowl! Soon joined by Soundwave and his cassettes, the 'Bot's fear the worst - and with scenes like this, it's not hard to understand why; 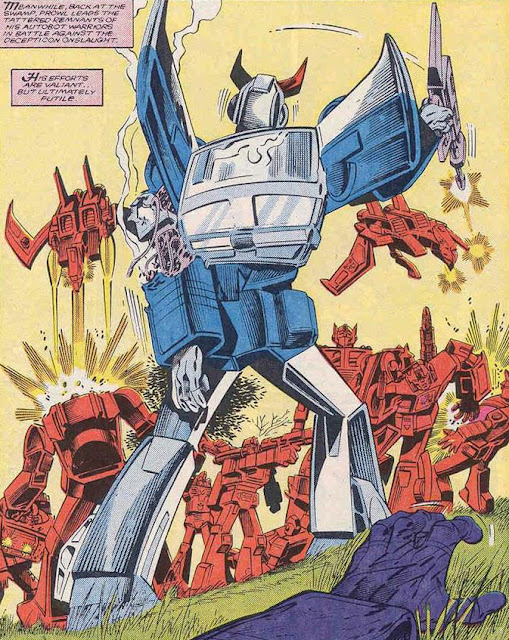 What a panel! Meanwhile at Decepticon HQ, Buster (whose mind now houses the Creation Matrix) refocuses. Swapping the drills inches from his skull for taking control of Jetfire and using him to take the real head of Prime to his body, a human gives the Autobots a chance of hope.

Unnoticed by the gloating Soundwave, the swap Prime's body makes leads to a confrontation between the two I as a fan had waited for. 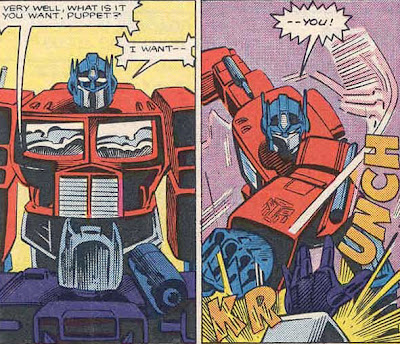 Okay, so I pictured it going a few more rounds than that - but what a punch! One that's going to need some panel-beating to hammer out!

With the 80's hardly a place for dragged out comics, the drama only picks up from there. Shockwave races to stop Prime ruining his master plan, a bunch of humans take the fight to Rumble, and the Autobots race to save Buster's head from been cracked open for it's treasure, like some kind of Kinder Surprise.

So if you see this book in your local back issue bin, don't leave it to rust! Herb Trimpe's art is as stunning on the inside as it is on the cover and Bob Budiansky brings the first major in-comic story arc of The Transformers to an end, with more power then a rugby field full of energon cubes. Look for it!
Posted by IADW at 9:00 am