DREADFIRE: The UK Comic That Puts Fans Across The Globe In Control 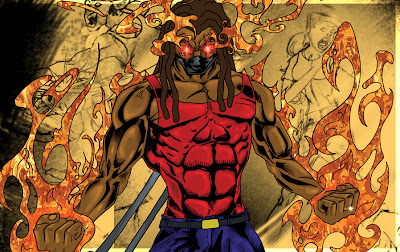 A cynic might say 'You either like your comics set in downtown Manhattan, or you like DC'. But how many of us have thought about what a super-hero would be like set in our own backyard?

Yeah, I thought so. Well while my 'Captain Kiwi' is yet to take flight, over in the UK it's a different story. There a duo of die-hard comic book fans have got together to produce Dreadfire - an online series, that not only takes place in Birmingham, but where the direction of the series is decided by you.

I grabbed Joel Wade, one of those responsible for a few questions, and firstly asked 'What is Dreadfire all about?'

JW: It starts with a young guy called Isaac who lives in Birmingham and is often the victim of street crime. Basically, he gets mugged all the time! He's frustrated by it and wants a hero to save him, but then powers fall upon him and he becomes the hero himself.

He struggles with his anger, and although he wants to be a good guy he often has problems with revenge steering his actions. Generally, we're trying to mix things up a bit, and make it so the good guys and the bad guys have more of a grey area, not everything is as it seems!
Unlike most bad guys, the aim of his first nemesis, Warlord, isn't to destroy Dreadfire but to recruit him. He has some scary methods to do this too, but we don't want to give too much away! 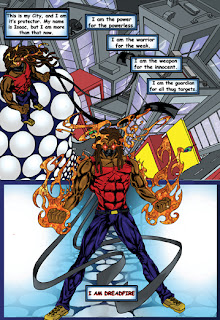 IADW: Speaking of giving away, the book's path lies heavily in the readers hands. What exactly will they be able to control? Plot? Timing of new characters?
JW: Everything. In fact, there's a poll on the Facebook page right now to choose what martial art the fans want him to learn first. Very soon we're going to announce a super-hero suit competition, where people will be able to design a look for our hero and have the chance to see it become Dreadfire’s first ever super-hero suit!
Imagine comic book writers and artists not having a clue what suit their hero will have for the foreseeable future? Crazy huh? But it makes it fresh for us and very exciting! There will be plenty of competitions for character designs, plot choices... everything you can think of. There are even opportunities for winners to appear in the comic itself!

Basically, what we have planned is the skeleton and our readers flesh it out, changing anything they want along the way. We're open to literally any suggestions and requests that readers send to us. This really is the readers’ comic book; we're just the henchmen!

IADW: With such a novel element to it, how did this whole project come about?

JW: To put it simply, we've been super-hero fans since we were kids, and we always wondered “how come there isn't a super-hero in our town?”. We like having Captain Britain, but decided it would be good to have an English superhero, made by English people.

We set about making it happen, but England is so diverse it was hard to decide how to do it. Then one of us said “It's a shame we can't just ask everyone!” and we thought, well why can't we?
For the rest of this interview click here.


What characters or creative runs inspired your love of comics that drove you to do this?

JW: The first comic book I ever read was an X-Men comic my friend owned, and I was instantly hooked. Both of us have always been huge X-Men fans. I read a lot of The Avengers, but stylistically I think that Jim Lee has a big impact on the style of the comic itself.  It's not all superheroes though, I get my laughs from Tank Girl and I've always loved the Walking Dead series, you can't beat a good zombie fest!

Jeshua is a huge fan of the Star Wars graphic novels, and loves anything Joss Whedon has EVER done, especially his comics! He's looking forward to the Flashpoint series. Oh, and Spidey, he never missed an episode of Spiderman growing up.

Another one for both of us is Batman, but who doesn't love Batman? Batman is great inspiration due to the fact that he doesn’t have powers, yet can still contend with anyone - no matter how impossible it may seem! You will see this idea explored throughout our comic book also; superpowers don’t make a hero/villain, it’s the actions we take and how far we take them that makes a difference. 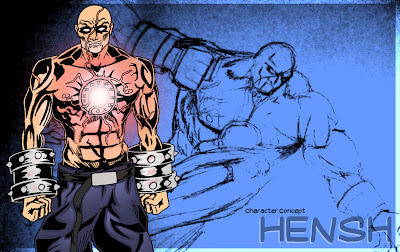 IADW: Speaking of villains, my favourite Dreadfire cast member is Hensh - I picture that guy in a Gabrielle Del Otto type painting, exploding power! What does Hensh bring to Dreadfire?

JW: Great question, and if you like Hensh now, just wait until you see what the dial on his chest can do! (If you check the picture of him in the concept art, the dial is only set to 1 out of 10!)

In terms of what he brings as a rival to Dreadfire, his difference in size and strength is what makes him such a formidable enemy. Dreadfire is agile and swift, and Hensh has unrivalled brute force. Think Spiderman Vs Hulk and you get an idea - if the Hulk knew Muay Thai!

Hensh is especially interesting because of his complex life, he was sold by his dad as payment for his debts to crimelords so you can imagine he's pretty messed up! He's the perfect example of how we don't keep our characters locked into specific roles. Our characters and out plot is more complicated and versatile, which is influenced by the readers. We don’t mean that Hensh just jumps from a Luthor to a Superman every other issue, but we also don’t want a cast of anti-heroes, it’s more complex than that. 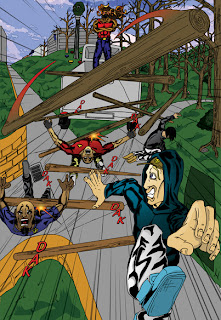 IADW: Besides escaping the downtown Manhattan setting, what else does Birmingham offer?

JW: Visually, it's completely different to what people are used to seeing. We aren't able to have our hero jump from skyscraper to skyscraper; we just don’t have enough of them! So we try to use the scenery in a much more interesting and less traditional way. For example, in issue two there is an amazing fight on top of the Selfridges building, if you Google 'Selfridges Birmingham' you'll see it’s a very interesting place for a scrap!
There are plenty of landmarks and unusual architecture here that people aren't used to seeing in a comic book. I think it has a more relatable feel to it, not everyone lives in a metropolis!

Also, Birmingham is considered the most multi-cultural city in England, This is something we have grown up around and have been heavily influenced by. It's helped deliver a great variety of characters from all walks of life, keeping things fresh and different.

Don't forget Dreadfire's not limited to staying in Birmingham; his adventures are going to take him many different places, where he'll meet plenty of heroes and villains! And whilst he is in England it won’t all be tea and crumpets!

Speaking of ‘tea and crumpets’ and by extension English stereotypes [laughs] we hope that Birmingham as a setting and furthermore England will show the rest of the world a bit more honesty when it comes to England, you know? We’re not just a nation of tea drinking Queen talking snobs or drunken football hooligans. There’s real diversity here and we want to show that!