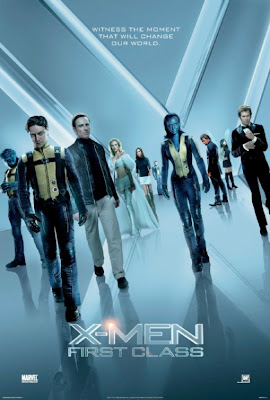 You don't have to be Professor X to get a score of 20/20 in hindsight. Earlier I blogged about how I originally wasn't going to see this film but changed my mind with it's release. Thank God I did. The title is X-Men: First Class and it truly means it.
Let me be clear; This is the best X-Men film yet.

Starting with an exact X-Men recreation of Erik Lehnsherr's separation from his parents, where it's predecessor split to Jean Grey's senate sermon, this film stays on the ground and follows what plans the Nazi Sebastian Shaw has for a boy who can bend metal to his whim.
A 'young Charles Xavier uncovering another of his kind' flip forward in time and we find Sebastian a wanted man. Moira MacTaggert is on his trail and Erik is after his head. Safe inside the Hellfire Club however, Shaw is about to induce a Cold War catastrophe, in the hope obliterating mankind will prevent it doing such to mutants.
As Moira and Erik's paths cross at Xavier, it is only through him and their collected first class of gifted teens, that world peace stands it's only chance. That is if Erik can put aside the fact he agrees more with Shaw's idealologies than his friends Charles' to achieve it. 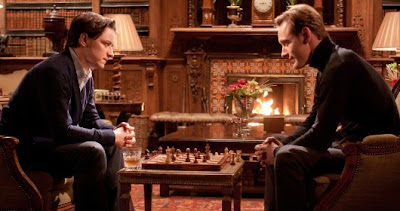 Like Sir Patrick Stewart and Sir Ian McKellen before them, the master-class of acting talent shown by James McAvoy's take on Charles Xavier and Michael Fassbender's Magneto anchor this film, giving the whole scenario it's believability.
While Kevin Bacon's Shaw is powerful enough to stop the master of (audience) magnetism walking away with the show from a rouge's perspective, Fassbender is a strong case for a prequel to this prequel, simply titled: Magneto. The scene 'Magneto's beer with the tailor and pig farmer' my favourite of the film. "Frankentein's Monster" indeed.
The ladies take point from here on down. Jennifer Lawrence serves as the films almost second plot base in the form (or is that forms?) of Mystique. Through her battle for acceptance in light of an actual physical mutation, we first see the differences between Charles and Erik, as well as uncharted territory between Raven and the Beast (Nicholas Hoult). Hank McCoy's blue furry self is better here then he was in X-Men 3, that's for sure. 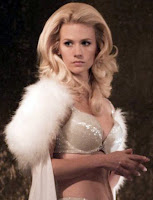 Speaking of visual awesomeness, I can't leave out a salute to the White Queen. Blurring some of the film's best lines and moments is Emma Frost.
While the movement of her diamond form is in need of industry award, it's actress January Jones' own facial expressions and bang-on body language (sorry, my mind is running out of adjectives) that nail the arogance and altitude of Ms. Frost. 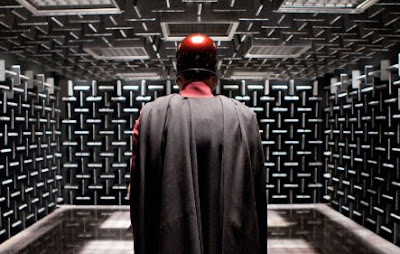 And yes anyone who's visited IMDB knows Hugh Jackman reprises his role as Wolverine here (albeit for three laugh-out-loud seconds), but what the listing doesn't show you is he's not the only returning star - and the other may not be who you're expecting...
With an ending that will leave you screaming for the sequel then and there, X-Men: First Class stomps all over Thor and Iron Man 2 like a Sentinel throwing a tantrum. The next stage in evolution for the X-Men franchise funnily enough - is right here at the start.