LEST WE FORGET: Plug In Ladytron

Despite having a first class ticket to ride, some of comics best concepts often miss the train and end up in four colour limbo, all but forgotten. Fortnightly in Lest We Forget, I pluck one of those limbo-lingerers, pimping their need for a comeback. Today, it's Ladytron. 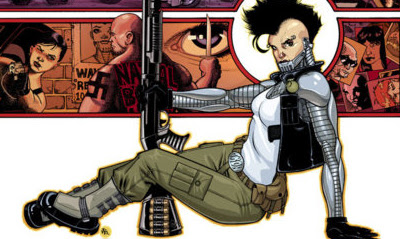 A throwback to 80's CyberPunk, Ladytron is three times as wicked. Not just an awesome visual in herself, the attitude of this smoking, ball-breaking, mohawked marvel makes her stand out from any other female anti-hero - and you know you can never have to many cyborgs!

WHY SHE IS COOL: The Power Behind The RAM
An abusive childhood doesn't cut you much slack with the FBI when you've turned to a life of murder and crime as a result. In Maxine Manchester's case it got her riddled with bullets, and handed to a mad scientist named Doctor Katz for spare parts.

Now running on an internal nuclear reactor with a sonic blaster in her mouth, Maxine was forced to kill Dr Katz's other cyborg creation, her husband Stanley, who she married between crime sprees. Captured and re-educated by the WildC.A.Ts, the once psychopathic Maxine still managed to retain much of her anti-social and sometimes savage bite.

Still, her strength of will and muscle didn't stop her being torn apart - literally. After being taken to the Church of Gort (a cult for cyborgs, robots and A.I's) for repairs, Maxine reemerged more committed than ever to protecting life - including that of machines, whose she viewed as equal if not greater, than that of any sentient being. 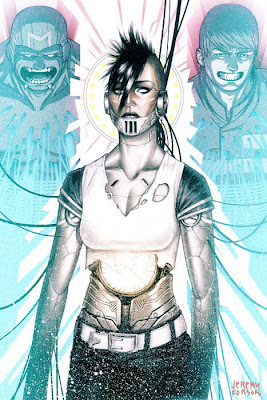 Sure all of that is up in the air with the new DC 52 title relaunch - but the facts don't change. With guns mounted in her arms and an attitude that would give Bats a run for his millions, there is no way a character this spicy should stay on the shelves gathering dust!

HOW I’D PLUG LADYTRON IN TO THE NEW DC: Every gunslinger needs a sidekick and Grifter is no exception! Sure the solicits for September's Grifter #1 say he's declaring war on monsters only he can see, but blowing stuff up and causing chaos to kill invisible monsters is just the kind of madness that puts LadyTron in drive!

Enough about me, after you've finished drooling over the image by Jeremy Forson above left, what do you think?
Posted by IADW at 9:00 am