Splash pages, you gotta love 'em. A blank canvas where the artist can hit you with a large dose of illustrated 'wow'. For this week's splashie, I thought after the release of The Avengers movie promotional image, I'd pay homage to their infamous splash page generating war cry; 'Avengers Assemble!' And if you're going to pay tribute to anything, you can rarely go past the work of artist John Cassaday to do it; 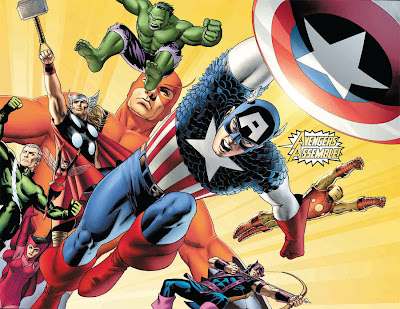 Running with a shield upside down must be pretty awkward, but having posed for camera's since the war, I'm sure Cap's up too it. Does Giant Man steal the show here for anybody else or just me?
Resisting the urge to launch into a 'The Avengers movie needs Pym' speech, this massive marvel was ironically enough part of Marvel's Fallen Son series of tributes, in the wake of the 'death' of the original Captain America.
So how about that? A tribute to a tribute, using an image taken from a tribute! That's got to be like a triple word score or something... starting the day on a high. Nice.
Posted by IADW at 7:21 am