If the League's mystery female in the post below had folks guessing on the DC side of the fence, flipping over to Marvel it was their teaser
"_ _ _ _ _ Reborn" by Ed McGuinness and Jeph Loeb that got tongues wagging. Today the most suspected candidate was confirmed; 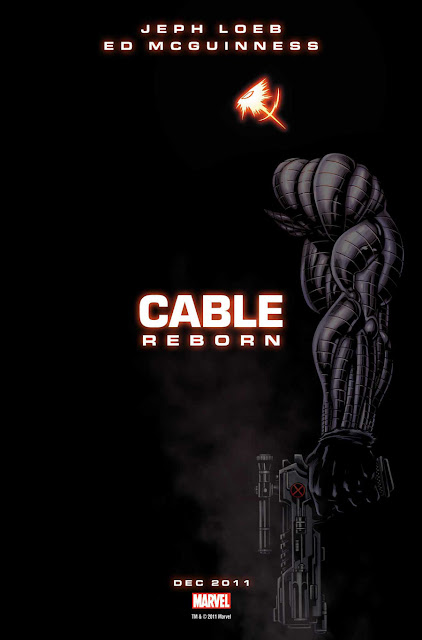 Touted as "the Captain America of the X-Men" by Loeb, whose first Marvel book ever starred the former leader of X-Force, Jeph continued to say the series would live up to the 'Reborn' statement and make waves across Marvel. Asked if Deadpool will also join in he responded "You've got Ed McGuinness, so..."

While it is exciting to think how Cable will view the new X-Force and the x-landscape in general, Editor in Chief Axel Alonso stated Cable wasn't the only one to watch for in 2012, and highlighted fellow Marvel icons Hope, Scarlet Witch and Hawkeye to break out in the year ahead.
Posted by IADW at 12:26 pm