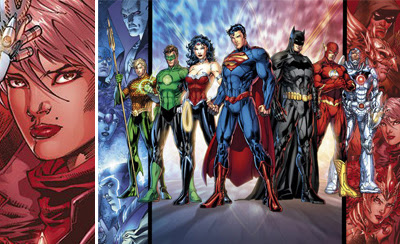 When the promo shot above for the full line-up of Jim Lee and Geoff Johns' new Justice League series was revealed, the internet had just one question; 'Who is that woman to the right of Cyborg's arm?' Zealot? Power Girl? Black Canary? Even the former Titan Terra got the odd mention. All were wrong.

Today at SDCC, Geoff finally stated she was a reinvention of the classic Quality Comics character Lady Luck. 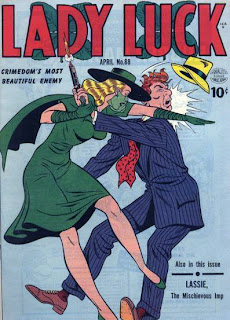 'Who?' You ask. Yeah, I thought that too - so here's a 1-0-1 to fill you in. Lady Luck originally appeared in a four page strip as part of a collection of comics Will Eisner created in 1940. She stayed a part of the Sunday newspaper insert The Spirit Section until 1946 - alongside heroes Mr. Mystic and of course The Spirit.
Bearing one of those great double-barrelled names, Brenda Banks, a young Irish-American socialite and heiress, fought crime as Lady Luck with the aid of her Italian chauffeur Peecolo and secondly police detectives Chief Hardy Moore and Officer Feeny O'Mye.
While Eisner wrote her first two adventures, her creative team quickly became Dick French and co-creator artist Charles Mazoujian. Other creatives to follow suit included the sublime Nick Cardy and Klaus Nordling who defined the look of "Crimedom's most beautiful enemy".
While originally a super-power free zone, Geoff Johns hinted this time things are a little different. "She's the luckiest person alive, she's actually frustrated by it. She wins the lottery everytime she plays and she gets involved [with the Justice League] when she tries to buy Wayne Tech".
Justice League #1 is out this August from DC Comics.
Posted by IADW at 10:02 am