MONSTER MASH: Monster Trucks Make The Mightiest Marvels Of All This July 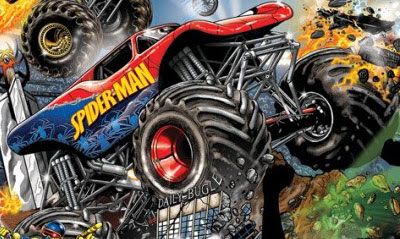 Every year when the San Diego Comic Con makes the national news, I think 'Damn I wish I was there!' This year. that dream has a brand new focus; Marvel Monstergeddon: Super Hero Smash Up!

I LOVE motorsports and none crunch my gears more than the big feat feeling of monster trucks! Plus it's great to see Marvel and Feld Motor Sports, doing new and exciting stunts to get comics infront of people!
Kitting out San Diego’s Qualcomm Stadium with Marvel Universe based buildings and pyrotechnics, Monstergeddon will see good vs evil motorstunt forces collide in an all-new Mighty Marvel Manner! 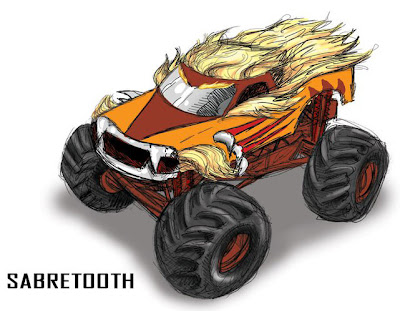 While it would be a crime if Ghost Rider and the Hulk weren't two of the characters featured, the villanous line-up, along with ol' concept sketch Sabretooth there, has to be packing a Galactus or Fing Fang Foom!

If you are lucky enough to spend the night of July 14th watching these 10,000 pound battlers, get your tickets at Ticketmaster.com before July 24th and you'll not only get 50% off, but also a free Captain America #1 with variant cover autographed by Stan Lee! Speaking of whom...

Labels: Marvel Comics, What Made Me A Fan