ONE SMOKIN' SPIRIT OF VENGEANCE

It may be a comic book sin, but one of my most watched DVD's is the last Ghost Rider movie. I hate the jelly beans, Karen Carpenter, and plot holes so big even Johnny can't jump them, but seeing the Rider in 'real life' after being a fan for so long more than makes up for it. Now Empire Magazine, the hottest source on all the biggest features has the first look at Johnny Blaze from the Ghost Rider: Spirit of Vengeance - and what do you know? He's even more realistic now. 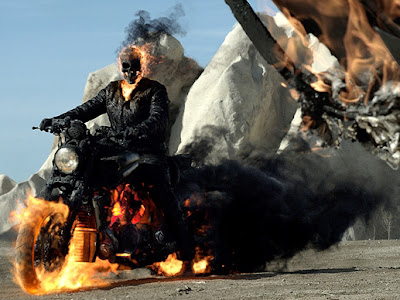 Small tweaks like covering the Rider and his ride in what looks like charcoal emphasises the heat of hell-fire. Having his tires and flame encrusted head give off plumes of smoke ensures Blaze is a truly terrifying sight for those who know they are about to burn.

See more photos from the crew at Empire, right after the jump.
Posted by IADW at 9:00 pm