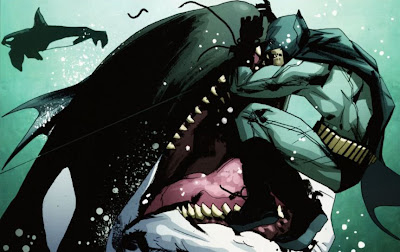 I'm going to completely overhaul my pull-list. To many titles on it are currently being picked out of allegiance to the character(s), rather than enjoyment of the creative team - and that's got to stop.

Attracted by news of DC's upcoming Swamp Thing #1, I picked up Detective Comics #878 to see if Scott Snyder has writing nuggets big enough to make an existing 'Dark Knight' fresh. The result? Well I haven't slept since - "Now where were we?" indeed. 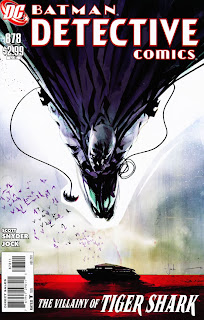 As for Snyder's plot itself, the scenario had me hook, line and sinker right from the start. Batman vs the shark in The Joker's Five Way Revenge by O'Neil and Adams is one of the all time greats, so it was brilliant to open the last issue in Scott's Hunger City arc and find Dick Grayson dangling over an Orca tank, later grappling with nature's massive marvel head on.

Better yet, the issue actually reads like it is Dick Grayson behind the cape and cowl. Dick's versatility is on show, from wisecracks to that serious warning tone that the bat-folk do so well, to using his circus past to save him from sharing a fellow performer's watery fate.

As Dick struggles to get out of Tiger Shark's submersible HQ, you'll find yourself thanking your nearest higher power for whoever had the idea to add a pirate with a Ra's Al Ghul complex to the rouges of a former circus acrobat. 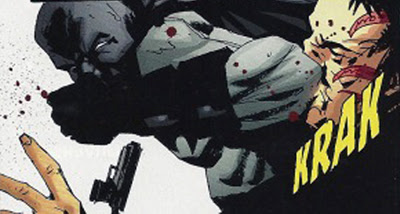 Another thing going down in the 'like' column is Bats putting the clues together as he confronts the femme fatale of the Zucco mob family, Sonia Branch. David Baron's colours were in a league of their own in this scene, but Detective Comics should always mean just that!

Then there is James Gordon Jnr. I can tell the apple that is the son of Commissioner Gordon has fallen pretty far from the tree - and with the last page of the issue I'm proven right. Has Dick found his own ultra-disturbing Joker in the son of his adoptive 'father's' best friend? God I hope so.

IN CONCLUSION: Dark but twisty, intelligent yet character driven - and wrestling with killer whales. What's not to love? If Scott's Swamp Thing ends up being half as entertaining I'll still be one hell of a happy camper. *****
Posted by IADW at 7:30 am