THE FIFTH FANTASTIC: Joe Quesada Reveals How He Draws The Four 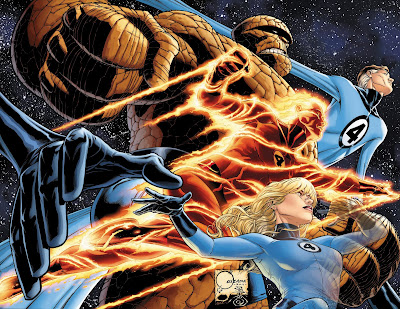 In my scrapbook of artist tips and back-stage passes, one of the most read pieces is an account of how Joe Quesada drew a cover to The Amazing Spider-Man. Now he's at it again with The Fantastic Four - my other main weakness in life.

While the finished piece above uses its awesomeness to burn into your memory and corneas, what follows is the step by step guide to it's immaculate conception, straight from Mr Quesada's very own tweets!

We pick up where after trying a few solo page composition thumbnails, Joe decides to go back to his first impulse; a large wrap-around cover piece. With his design brief to create a 50th Anniversary piece that could be used for a poster, ad, cover or all points in between.

"The idea now [was to] get some movement into it, show off their powers. Came up with this rough. There was something here to work with, so I started fleshing it out." 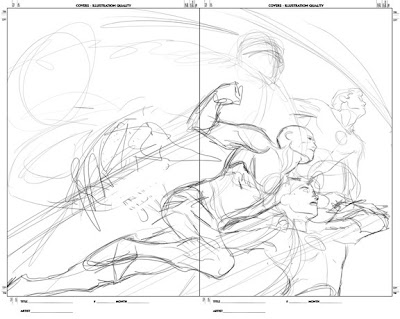 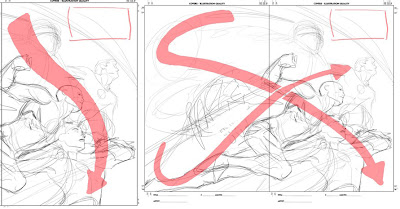 "Here's what I liked about it, if it was a wrap cover, the side facing the customer had the right composition. The viewers eye, led right to left and top to bottom. As a poster or promo ad, it also had a good flow.
Yes, for those of you thinking it, I sweat this stuff A LOT! FYI, all these sketches drawn digitally on a Cintiq with Sketchbook Pro. I can't recommend Sketchbook Pro enough, just an AMAZING pencil tool that feels and looks pretty darn real."

"Okay, now I switched over to Photoshop, time to get into the details. Ben Grimm is the anchor to the piece. Now that I had Ben's basic shape blocked in, time to do those damn cracks." 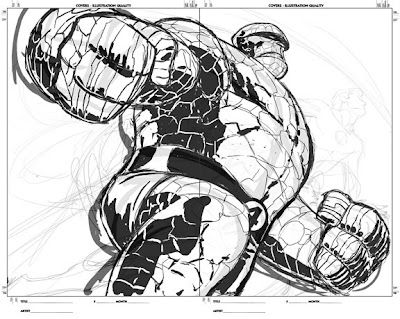 "And now here's a much tighter version of Ben. THE THING IS BORN!"

"Johnny Storm, here we come. One of my fave characters as a kid, too bad he's dead. Notice I pushed Johnny up in the layoutt, this was a result of how Ben ended up sitting on the page after I blocked him in.

Once I was happy with Johnny's anatomy and dynamics, I added in some modeling. Flame effects, keep in mind we're still in the layout stage and I'm now cursing myself for going double page." 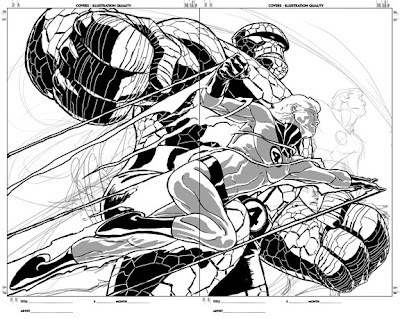 "You may be asking, why go to all the trouble of drawing every character in layers? It's my process but also it serves a purpose here. More on that later, in the meantime, it's time for Sue Richards. Notice Sue has moved as well in the layout." 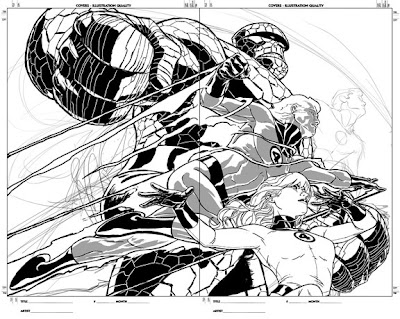 "Ben, Johnny and Sue, almost there." 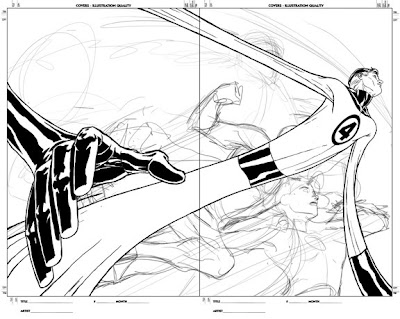 "And now for Reed, he's important as his power as it allows me to use him as a design element. He's also shifted."

"The team in all their glory, but something's missing...

Ah yes, a background that harkens to their origins and sense of wonder that the FF brings. Now, what you're looking at, is my final layout before I got to pencil on board. Notice that you can see Ben, and Johnny through Sue. The slight invisibility aspect of Sue is something that I'll work on with the colorist. This layout done in Photoshop was done at actual art board size and 400 dpi resolution using the pencil tool." 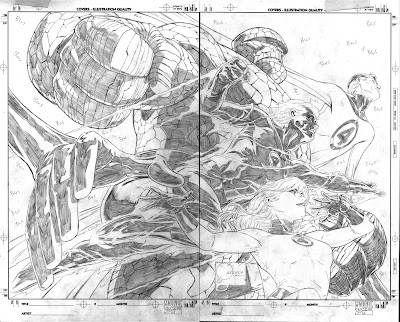 "Now, I take this layout and print it at actual art board size. I then take those printouts and tape them to the back of the art board. Once taped and ready, I break out the old lightbox and start penciling. I use a very hard 4H lead. Here's the final penciled piece. BWS is old school comics shorthand for the inker, it means black with stars.

Now comes the waiting game, like a kid on Christmas I have to wait a few days for the brilliant Danny Miki to ink it. And then it comes. Once again, is there any doubt about how amazing Danny Miki is?" 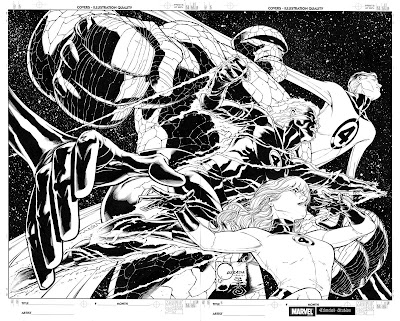 "Then I got the bad news, legendary colorist and my long time collaborator Richard Isanove was on vacation and couldn't color the piece. Luckilly at Marvel we have an embarrassment of Riches when it comes to creators and the amazing Laura Martin was available to color it. I was floored and flattered that Laura was going to color it. I e-mailed Richard and told him this could be his Wally Pip moment.

So now here is the never before seen final colored piece (top) and remember it's just between us folk here on Twitter. Oh, and the reason I drew all those characters through in the layout was to be able to get Sue's invisibility power done in the color stage.