GET SKINNED UP: New Zealand's Mighty Ape Brings Batman Beyond To Arkham City

More than that thingee dropping on Times Square New Years Eve, pop-cult fan's are waiting with baited breath for the release of Batman: Arkham City - and the best online store in New Zealand is coming to the party, with skins that let you romp through the rock 'em, sock em sequel as Batman Beyond, Batman Animated or Geoff Johns' Batman: Earth One! 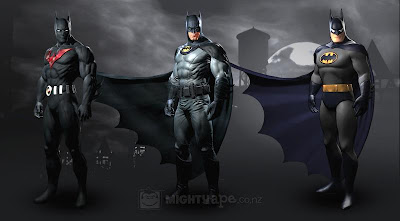 While other retailers may offer other skins, MightyApe is personally my favourite online store period. They're so quick, their goods are well packaged and the site kept incredibly up-to-date - so seeing them get this kind of exclusive beats everything else hands down.

Plus not only is there not a bod alive that doesn't want to pit Batman Beyond against the evils of modern day Gotham City, the cost is in New Zealand dollars -so you can probably afford to buy six! (You will flip one this way if you do right?). Visit MightyApe after the jump.
Posted by IADW at 9:18 am