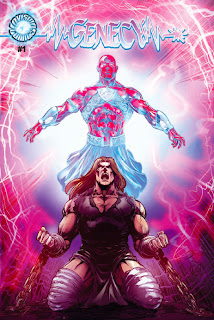 "If the odds being made even might put me at a disadvantage, let us see how great this disadvantage might be!"
Today, I did the Toughguy endurance event. Mud pits, swamp running, cargo nets, barb wire and other obstacles, all cross-country terrain, so believe me when I say all I wanna do this arvo, is kick back and read some decent comics in peace and recharging quiet. First up on the reading list; Genacy #1 from the enthusiastic folks at InVision Comics.
For some, revenge is a dish best served cold. For Kaizaxx it's about to be served steaming hot, as only a slave from the planet of Tanaan could deliver upon his people's oppressors, blessed with powers from the earliest of ages.
The debut issue of Genacy not only sets the table for such a feast, it charts Kaizaxx's travels from escaping the slave dungeon's of the Grunnod to the surface of a mysterious planet whose whirling sands hide The Dome of Raknirod, wherein lies his chance for retribution. 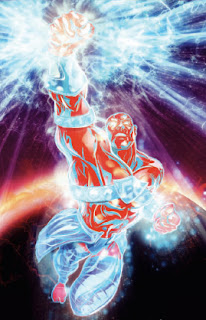 Transformed into Genacy (left) by the issue's end, the book looks set to explore through Kaizaxx if power is truly the best thing to fill the cracks of a broken soul and the trials that one is put through in finding those answers.
The issue's first chapter took a few read-thru's to fully grab hold of, as in keeping with the pace of the characters escaping the slave colony, the story moves literally from one big impact moment to the next without much space for a breather. The assault of action and Tim Ogul and Oren Kramek's vibrant colours, pounds home the explosiveness of the situation so well, that by the time Kaizaxx slams onto an unknown planet's surface, you too feel the repreave.
The second half is where the book really comes into it's own. Stepping within the dome Kaizaxx walks above the bodies of fallen warriors. As legions of the deceased soon rise to protect the power within and test his worthiness to embrace it, not only is the barbarian unleashed, but also the writing skills of Gerald Cooper and the art of Eddy Barrows.
One of old 'zaxx's antagonists even stands to win the award for 'Best new character visual of the year'. Take it away Rathgar; 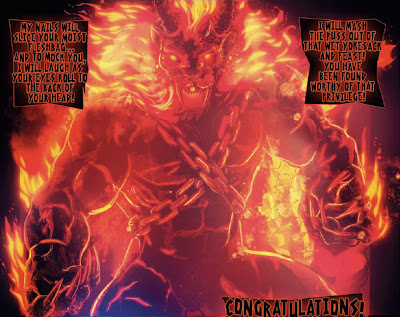 Yes friends, he's a giant devil-horned, lion-faced warrior who is constantly ablaze. Freakin' sweet!
A former servant to the entity that blesses Kaizaxx with his new abilities and the identity of Genacy, Rathgar's fury at his masters selection should ensure a few sparks fly between the pair in future.
If established universes of rampant change is affecting your love of the medium, you're wanting something fresh or the idea of what Conan would do as the Silver Surfer floats your boat, then I recommend you flip a few coin out for Genacy. Conveniently enough, you can do that very thing at indyplanet, right after the jump.
Posted by IADW at 4:20 pm