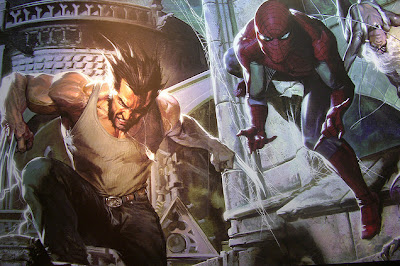 I'm a simple dude. I'll take inter-connecting artwork over your foil embossed, die-cut, glow-in-the-dark, sealed-with-a-kiss 'collector's items' any day. A bit of a rare find in today's releases, I want to give a thumbs up to the artists who mastered the Herculean feat of making separate individual images as strong and cohesive as they are as a unified whole the only way I know how - by making a series of posts about them.

First up, Gabriele Dell'Otto, a man who has done some of his best work for the European arms of Marvel and DC, including this 5 poster spread for the House of Ideas back in 2008.

Don't believe such a wicked unit of Hulk, Iron Man, Storm, Wolverine, Spider-Man, Black Cat, Nightcrawler and Shadowcat could ever be separate images? Here are the books the individual posters were originally included inside; 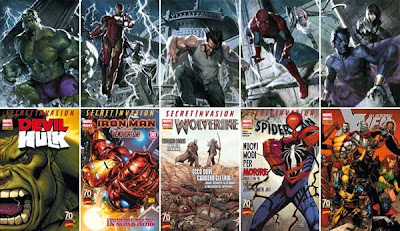 Never has living in France offered so many benefits! Hopefully this jaw-dropper will be available in the American markets someday - I don't know about you but my walls need this poster!
Posted by IADW at 10:22 pm