Splash pages, you gotta love 'em. A blank canvas where the artist can hit you with a large dose of illustrated 'wow'. This week I'm killing two birds with one stone; rebalancing the recent DC 52-mania on IADW with a bit of Spider-Man and slipping in a bit of Chris Bachalo art on the sly to keep my addiction to his work under control. See? It's win-win! 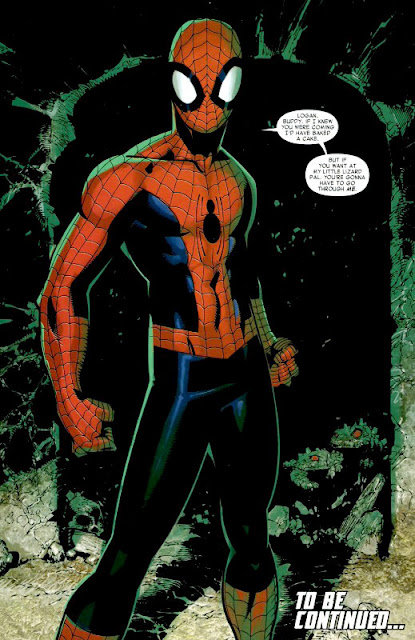 I'm going to level with you, I've never been a big fan of 'bug-eyed Spidey' - preferring the more John Romita kind of style - but Chris really made it work in his recent spider-run and here in X-Men Vol3 #7.

Watching Wolverine fly out of the sewer tunnel he was spider-punched from was cool enough on it's lonesome, then to follow it by a splashie like this that nails Spidey as a wispy kinda guy and not Hawkman in spandex - well it just makes a spider-powered dude seam that bit more 'realistic'.
As if Terry Dodson's nicely done Spidey hanging on the cover wasn't enough!
Posted by IADW at 1:51 pm