Splash pages, you gotta love 'em. A blank canvas where the artist can hit you with a large dose of illustrated 'wow'. This week, talk of October's new Huntress mini-series made me dig out a previous one for old times sake. Featuring awesome art by Michael Netzer, when it comes to great splashies I wonder how I could've ever forgotten this; 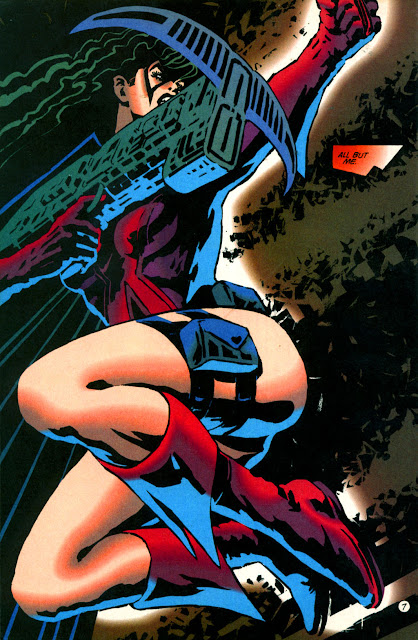 While that crossbow always makes me think of the Marines in Aliens, I love the modern Huntress, Helena Rosa Bertinelli.
Daughter of a slain mob boss, it rocked my Gotham to see a vigilante who stood their ground against Batman, let alone one who as a teacher by day, had to deal with the frustrations of seeing her students take to the streets over more promising life-paths.

Sure she's changed costumes almost as often as Spider-Man, but I'm glad to see early in the new DC, Huntress getting her due.
Posted by IADW at 6:00 pm